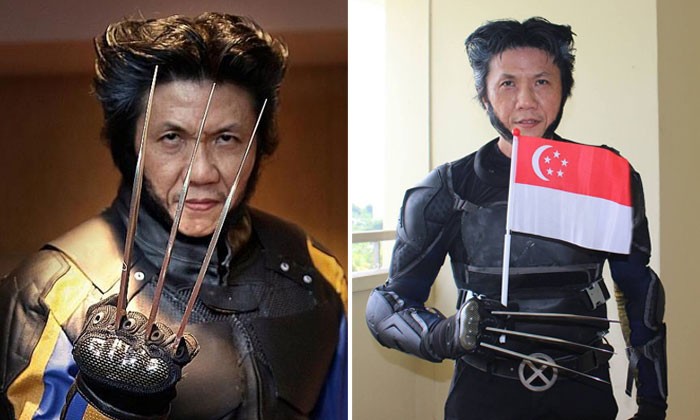 He has been a Wolverine superfan since 2000, and is having mixed feelings about Australian actor Hugh Jackman leaving the franchise after 17 years.

Mr Rocky Go, 45, told The New Paper: "I'm sad to see Hugh Jackman leaving us as Wolverine but I'm excited to see another Wolverine movie on the big screen.

"I believe filmmakers will never give up on Wolverine.

"Who knows, Jackman may even come back as Wolverine."

Jackman makes his final outing as Wolverine in the film Logan, which opens in Singapore tomorrow.

Mr Go's passion for Wolverine started when he watched the 2000 film X-Men.

In 2009, the senior engineer joined movie character talent and fan club Movie Mania and got to know the events and cosplay activities organised by them.

He said: "With their encouragement, I finally plucked up the courage to join them during the Singapore Toy Game and Comic Convention to cosplay as Wolverine."

He finds Wolverine's regenerative healing powers and apparent immortality interesting, adding: "I also hope to be forever young... and continue to have a youthful heart to cosplay with the rest of the community."

Mr Go, who has cosplayed different versions of Wolverine over the years, has seven sets of costumes and two casual outfits similar to what Jackman dons in Logan, which opens here tomorrow.

He has spent over $4,000 on costumes over the past eight years, and has already tailored his fourth X-Men suit due to "wear and tear".

He has also shipped in leather jackets that appear in the 2009 movie X-Men Origins: Wolverine and both the 1973 and armoured versions of the suit seen in 2014's X-Men: Days Of Future Past. Each cost between $300 to $500.

Mr Go is also a collector and has spent about $1,500 on Wolverine figurines, cards, books, jackets and a Zippo lighter over the years.

"I like the long coat which Wolverine wore to fight the ninjas in Japan (in 2013's The Wolverine) and in 2014, I wore it to Universal Studios in Japan to cosplay as Wolverine because that movie was filmed in Japan," said Mr Go, who is married with no children.

"My wife has been very supportive of my cosplay events. She was my photographer during the Japan trip as well as some of the other events."

Mr Go, who has sported the same hairstyle as Wolverine for the past 10 years thanks to his neighbourhood hair salon, had the opportunity to meet Jackman when he was in town to promote Days Of Future Past in 2014.

"He was tall and very nice, signing autographs for all his fans," he said. "Unfortunately, I was wearing the X-Men suit and all the X-Men cosplayers were told to stand beside the stage so we were not able to get close to him.

"That made me upset for almost three months."