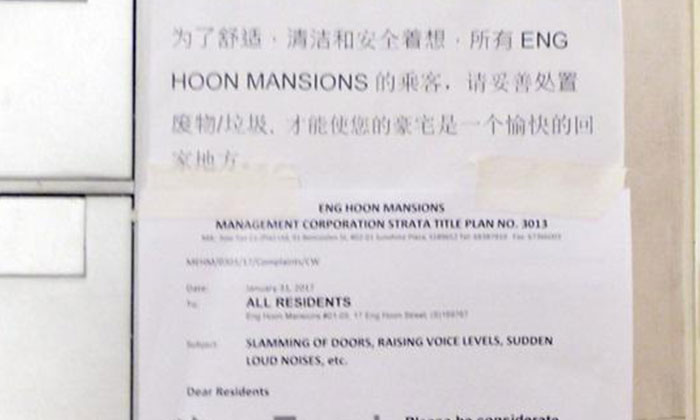 A hilarious badly translated notice at the Eng Hoon Mansions condominium residences in Tiong Bahru has left netizens in stitches.

The notice reminded residents to be more considerate towards their neighbours, and to avoid undesirable actions, such as dumping rubbish out of windows, or slamming the doors shut forcefully, in order to avoid disturbing the other residents.

However, sharp-eyed readers have noticed the errors and informed reporters about it, reports Lianhe Wanbao.

The word ‘throw’ in the statement ‘please throw your rubbish into the bins, and not out of the windows’, was translated into the Chinese verb ‘滚动’ which broadly means rolling or churning.

One resident even commented jokingly:

“Do they expect us to churn or roll about in the rubbish each time we throw things away?”

The notice also encouraged good hygiene habits amongst residents and asked for them to treat the entire building as their home.

However, the translation was off once again, and the notice instead read:

“We hope this is your house, and not that of pests and vermin.”

In another instance, the phrase ‘avoid slamming the door’ was translated to ‘不打门’ which meant to refrain from hitting or breaking the door, while residents were addressed as '乘客' which meant passengers.