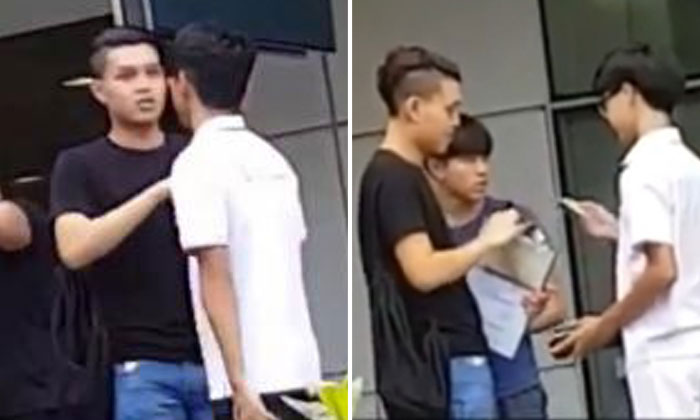 Two teenagers aged 17 and 18 have been arrested for their suspected involvement in impersonating police officers.

This comes after a video showing a group of young men forcibly seeking donations in public by allegedly claiming to be from the police circulated online.

On Apr 7, a Stomper alerted us to the video that was first published by a netizen on Facebook.

In the video, a secondary school student in uniform can be seen handing money to a young man clad in a black T-shirt. The latter was accompanied by three others.

A companion was with the student at the scene, but tried to leave as his friend was 'donating' money.

However, the man in the black T-shirt stopped him, apparently to ask for 'donations' as well.

The video has since been removed but a copy of it can be found on Unscrambled.sg.

The netizen who published the original video claimed that the men will say that they are police officers and will force passersby to 'donate' money. If they don't do so, they won't be allowed to leave.

Said the police on Facebook after the video made its rounds online:

"The Police have arrested two men, aged 17 and 18, for their suspected involvement in several cases of impersonating a public servant.

"On 6 April 2017, the Police received a report of a group of young men claiming to be Police officers and engaging in aggressive tactics to seek donations in public.

"Through extensive follow-ups, officers from Ang Mo Kio Division established the identities of the group and two suspects were arrested on 9 April 2017. The Police are also investigating against the licensee for possible breach of regulations under the House to House and Street Collections Act.

"Police investigations are ongoing. Anyone found guilty of an offence of Impersonating a Public Servant, under Section 170 of the Penal Code, Chapter 224, may be punished with an imprisonment term which may extend to 2 years, and shall also be liable to fine.

"The Police would like to remind the public to be vigilant and wary of persons who may impersonate as Police Officers to facilitate the commission of their criminal acts. If in doubt, they should request for the Police Officer’s Warrant Card to verify his identity before complying with the instructions of the officer. A genuine warrant card will have identification features such as the Police crest, the photo of the officer, his name and NRIC number. When the card is tilted at an angle, the holographic word “POLICE” will also appear below the Officer’s photograph. If they are still unsure of the person’s credibility as a Police Officer, they should call 999 for assistance. More information on how to identify and verify the authenticity of a Police Officer is available at http://bit.ly/2oiH0QB."