TCM establishments found to be offering sexual services: Customers can opt for 'happy' and 'special' endings 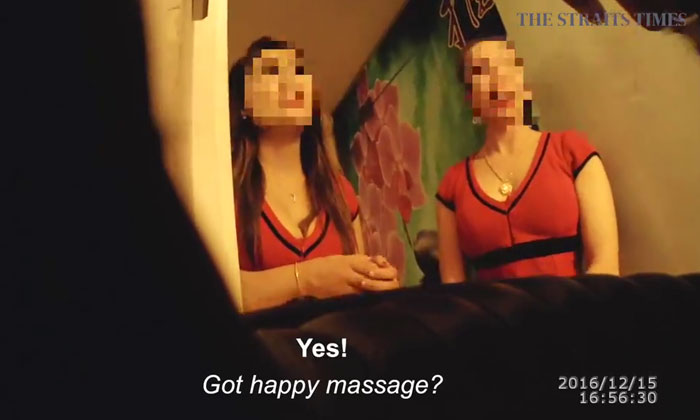 A number of traditional Chinese medicine (TCM) establishments registered to the same man have been found to be offering sexual services.

The businesses advertise themselves as TCM clinics with signboards outside the premises promoting treatments like tui na, cupping and acupuncture. However, when approached, female employees at seven of the establishments The Sunday Times visited said a "doctor" was not available.

Six of the businesses instead offered a different kind of massage, with options for "happy" and "special" endings, terms used to describe sexual services. The women dressed in short dresses pointed to their bodies when making the offer.

The six "clinics" were traced to the same owner with more than 30 establishments with the word "TCM" listed as part of their Accounting and Corporate Regulatory Authority (Acra) registered names.

The Sunday Times learnt that the registered owner of the clinics is a licensed TCM practitioner.

Some of the establishments are registered under the category of Clinics and other General Medical Services (Non-western) in their Acra profiles. To register a TCM business with Acra, companies need to first obtain the required approval from the relevant regulatory authorities, said an Acra spokesman.

In the case of TCM, physicians have to be registered with the Traditional Chinese Medicine Practitioners Board (TCMPB), a statutory board under the Ministry of Health (MOH). TCM clinics are not required to be registered with MOH. The registered TCM practitioner must then submit the English and Chinese name of the clinic to the board for approval first, before registering the company with Acra.

It is unclear if this was done for the six TCM clinics The Sunday Times visited last month.

Separately, the Acra spokesman said owners registering a business with names and activities containing the terms "hospital", "medical clinic/centre"or any other similar terms are also required to get approval from MOH first.

Registered physicians have to display their original registration certificate conspicuously at their main place of practice and a certified true-copy at all other places of practice, said TCMPB's executive secretary Quah Ai Mui.

It is an offence for a person who is not registered as a TCM practitioner to practise, advertise or claim to be qualified to carry out prescribed TCM practice, she added.

"It is also an offence to employ someone who is not qualified or registered to practise any prescribed practice of TCM."

If convicted for practising TCM or advertising oneself as a qualified TCM practitioner, first-time offenders can be fined up to $25,000 and jailed for six months. For employing someone who is not a qualified TCM physician to carry out related practices, those convicted face a similar penalty.

Spas and massage outlets - some of which have been fronts for those offering sexual services - have found it more difficult to receive a licence to operate from the Police Licensing and Regulatory Department. This has prompted a growth in "TCM" establishments in recent years, said those in the industry.

TCM physicians The Sunday Times spoke to said they are aware of such illicit activities in TCM clinics operated by errant practitioners.

Said physician Tay Kim Soon, who has been practising for over 15 years: "There is a small group of black sheep who do this to make a quick buck. They tarnish the reputation of this respected profession."

Police often raid massage establishments to weed out those that operate illegally.

Last June, 75 people were arrested in a four-day enforcement blitz on unlicensed massage parlours and public entertainment outlets. Last November, police also nabbed 81 women in raids at Thomson, Paya Lebar, Selegie, Outram and Bukit Timah areas. A police spokesman said: "We take a tough stand against vice activities and will continue with our regular enforcement checks to deter and detect such illegal activities. "Operators found conducting illicit activities in massage establishments will be taken to task."