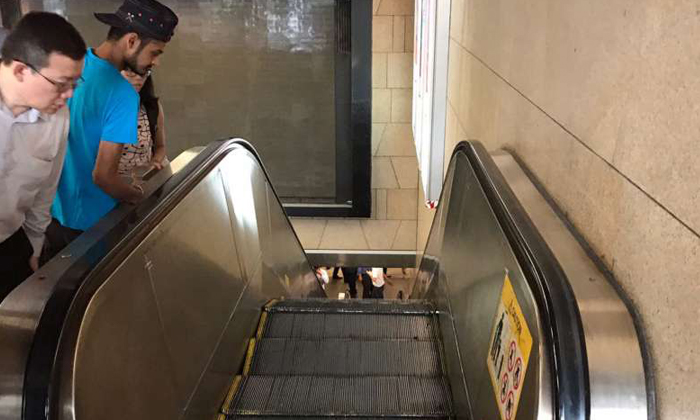 A stroller being taken up an escalator at Raffles Place MRT station on Wednesday became wedged between the steps as it approached the upper landing.

The downward pressure exerted by its wheels caused the steps to dislodge and triggered a mechanism that stopped the escalator, said the Building and Construction Authority (BCA) yesterday.

The child in the stroller was not hurt in the incident.

The BCA said it was aware of another incident last year where a pram became stuck in an escalator and dislodged the steps.

"For your children's and your own safety, we advise all users not to carry heavy or bulky items, such as luggage, onto escalators," it said.

"Prams and trolleys should not be used on the escalators too."

Cleaner Phua Kok Hee, 62, told The Straits Times there was a loud bang when the incident happened.

"I saw people slowly coming down the escalator, and immediately went to tell the staff at the control station," he said.

The incident took place at Exit A of the busy interchange, which leads to buildings such as Chevron House and One Raffles Place.

Mr Patrick Nathan, SMRT's vice-president for corporate information and communications, said the area was cordoned off for the safety of commuters.

The escalator is closed for repair and will be reopened when works have been completed and approved, said the BCA.

Mr Lum Chong Chuen, 72, an engineer who has been providing building services consultancy for about 50 years, said such incidents are not common.

"In this situation, if the comb plate (at the top of the escalator) had shifted, the escalator would have stopped to prevent accidents."

The latest incident comes after stricter rules were announced for the 6,000 or so escalators in Singapore.

Since November last year, it has been compulsory for escalator owners to engage registered escalator contractors for monthly maintenance.

BCA chief executive John Keung said last July that there were "not that many" escalator accidents reported in Singapore, but there had been some abroad.

In 2015, for instance, a woman died in China when she fell through a floor panel at the top of an escalator.

"That's why we are concerned. Let's make sure we do all that we can to prevent such accidents," Dr Keung had said.