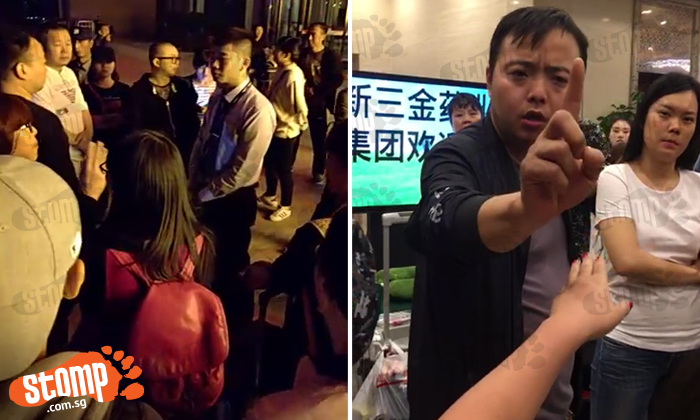 A Stomper and at least 130 passengers were left stranded in Xi'an, China after their Tigerair flight was delayed on Wednesday night (Apr 26), leaving many people enraged and the situation chaotic.

Flight TR2969 was supposed to leave for Singapore at 11.35pm, but was rescheduled due to a fuel leak on the aircraft wing.

According to The Straits Times, the airline said in a statement: "The affected aircraft required more time for servicing and we hence applied for the necessary regulatory permits with the China authorities to send a ferry flight to Xi'An. In the meantime, our guests were accommodated in a hotel."

The passengers apparently waited on the plane till 3am, before they were taken to a hotel some distance away from the airport and provided meals.

The Stomper said in WhatsApp messages to Stomp last night (Apr 27), "We were told by the person-in-charge that we could fly the next day as Tigerair has already sent another airplane to fetch us back. We were guaranteed a flight at 11.30pm.

"But when we on our way to the airport today, the bus turned back and we were told that we could not fly as the plane was still in Singapore and had not taken off yet.

"Now, all passengers are stranded in the sane hotel demanding for an explanation as we have no idea when is the next flight."

The second delay was apparently because the replacement plane had not been given approval to leave Singapore.

"No Tigerair staff are here to explain to us the situation at all throughout this whole incident. It was all random Xi'an airport staff," said the Stomper, who later added that local police were called in due to the commotion.

Videos sent in by the Stomper show angry passengers surrounding airport staff and trying to make sense of what was going on.

In one clip filmed outside the hotel, a woman can be heard saying in Mandarin that she was "very anxious", explaining that she had to hurry back because someone else needed her documents for a meeting in America.

Another man remarked, "How can there be a delay of over 10 hours?"

In a separate video, a man in black and several passengers can be seen raising their voices at one another at what appeared to be the hotel lobby.

The man repeatedly told everyone not to shout and to let him finish what he had to say, before trying to explain what would happen next.

However, the passengers were not satisfied and demanded to go to the airport. Some also wanted to know who he was and which company he was representing, as he had not introduced himself, they said.

In its statement, Tigerair said that approval for the ferry flight was granted at 9.30pm on April 27 and the flight is expected to arrive in Xi'An at around 4am on April 28.

"The retimed flight TR2969 is now scheduled to depart for Singapore at 4.35am today," it added.