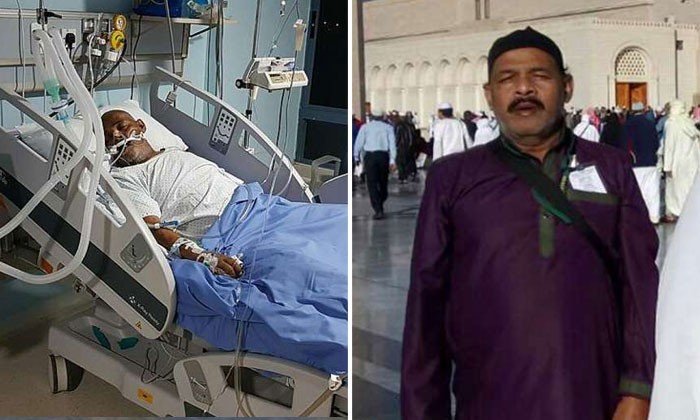 He fell to the ground after being pushed during a minor pilgrimage in Mecca, Saudi Arabia. In the confusion, someone stepped on Mr Abdul Ghafur Mohd Ibrahim's left ankle.

Now, the 59-year-old bus driver is recovering in a Jordan hospital with his left leg having been amputated after it was infected by flesh-eating bacteria. His family, facing a rising medical bill currently at $123,000, is trying hard to raise the cash, along with the money needed to repatriate him.

His son-in-law, Mr Mohamad Ameen Said Abdul Kadir, told The Straits Times on Monday: "We're just shocked that a small ankle injury could become so serious. We were heartbroken when we learnt he was infected by flesh-eating bacteria."

Mr Abdul Ghafur and his wife were part of a group that left Singapore on Dec 11 last year to perform their "umrah". After his fall, and towards the end of the pilgrimage, Mr Abdul Ghafur discovered big blisters on his left foot. As he was then staying in Jordan, he checked into Al Khalidi Hospital in Amman on Dec 23.

For the next three days, doctors gave the Malaysia-born Singapore permanent resident antibiotics to control the infection on his ankle which was oozing pus.

But the infection continued to spread aggressively, said Mr Ameen, a 37-year-old operations manager. On the fourth day, Mr Abdul Ghafur's left leg had to be amputated above the knee, as the infection worsened after he developed a high fever and low blood pressure.

Now, his family is in a spot as they have been saddled with a hefty medical bill of about $123,000 as of yesterday. A copy of the 35-page-long medical bill and medical report was shown to ST.

His daughter, who gave her name only as Madam Rabiathul, 35, told ST "the medical fees are too high for us to cover".

Through contributions made by strangers who had seen the family's plea on social media for donations, the family has managed to raise around $32,000.

But they are still short of cash and they expect the bill to increase.

Mr Ameen said he felt the $55 travel insurance his father-in-law had paid for as part of the "umrah" package was "inadequate".

ST understands that the travel insurance covers only $20,000 for hospitalisation and $50,000 for repatriation to Singapore.

Mr Ameen said: "The cheapest quote to fly him back to Singapore with proper medical attention is around US$120,000 (S$174,000). But he is currently in no condition to fly.

"What's important for the family right now is to generate as much funds as possible. We're thankful that some help is coming our way."

Mr Ameen confirmed he had sought assistance from Singapore's Ministry of Foreign Affairs. The family is also looking at Mr Abdul Ghafur's personal accident insurance plan, which has a clause for permanent disability.

Added Mr Ameen: "Basically, my father-in-law's personal accident insurer needs to see him in Singapore where his condition will be examined and verified by the insurer's doctor before any payout is made."

Mr Abdul Ghafur's plight was initially raised by netizens such as Ms Rubiah Suib, a colleague of Madam Rabiathul, who had appealed for donations on her Facebook on Dec 28. Her post was shared, among other similar posts, more than 500 times.

Mr Abdul Ghafur remains in an intensive care unit and is being supported by a ventilator. His family is relieved the bacterial infection appears to have been contained.

Related Stories
26-year-old woman in Berlin breaks arm after getting kicked down stairs in shocking unprovoked attack
Singaporean chef, 44, ends up in Malaysian hospital after getting beaten up by 3 men with baseball bats
heartbreaking
amputate
injured
bacteria
Jordan
singapore