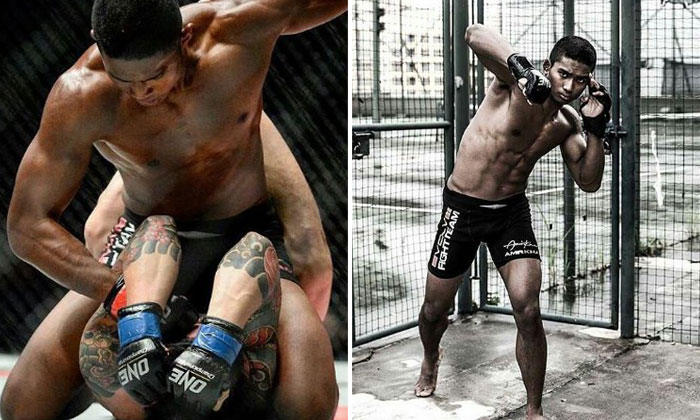 Singapore mixed martial arts (MMA) sensation Amir Khan had to hold onto his persistence as he found out at an early age that life was never a straightforward pathway.

The 20-year-old MMA athlete is a self-described introvert as he was once embarrassed by his peers due to the involuntary tics and twitches caused by having neurological disorder Tourette's Syndrome.

Although Khan's condition is under control now, life was very different for him when he was younger.

“Growing up, I used to have spasms. I used to shake my head a lot. I would blink my eyes and make facial expressions. When I was younger, it was really bad. When I was in school, the other kids would pick on me and imitate me. It was tough growing up with it,” he recalled.

Khan took up martial arts to gain confidence after a difficult time at school, when his Tourette Syndrome was at its worst.

"After I did martial arts, partly because I looked better and mentally I felt better as well. I have more confidence," he said. “I didn't really enjoy my school days. After a while, I gained more confidence and it subsided. I felt more confident and I wasn't embarrassed about myself.”

With a supportive family behind him, Khan never felt his condition prevented him from achieving his goals.

Khan started his martial arts journey at the age of 13, having the sudden impulse to learn Muay Thai and quickly falling in love with it.

Widely regarded as “The art of eight limbs,” Khan discovered that Muay Thai helped him to focus and overcome his disorder.

“I believe martial arts has helped me through my Tourette’s. Whenever I felt like I could not control my Tourette’s, then I would go to the gym and I would sweat it out. I felt relaxed and better after each session,” he stated.

“In martial arts, you cannot really take your eyes off your opponent when you are sparring with him. You have got to really focus, or else you will get hurt, so it definitely taught me how to focus, and I was able to bring it over into real-life situations,” he added.

Muay Thai began to flow through Khan’s blood, and soon at the tender age of 14, he competed in his first amateur contest. After a few more bouts, he spent two months training in Thailand, which led him to consider turning professional.

After mastering Muay Thai that demands steady hands and concentration, Khan transitioned to the constantly-evolving world of MMA, winning his first four amateur bouts from 2012 to 2014 in the U.S, state of Louisiana.

Khan honed his skills there for nearly four years before returning to Singapore, aspiring to make himself a household name closer to home.

Three years later, Khan is now considered one of the most promising young talents to represent Singapore on the MMA stage.

Holding a professional MMA record of 6-2, Khan is currently riding high on a three-match winning streak with his victories coming by way of exciting finish.

In his recent trip to the ONE Championship cage last November, Khan notched a third-round submission over Filipino fighter Vaughn Donayre in a tough match-up.

Khan will once again compete in front of his hometown crowd as he takes on Rajinder Singh Meena at ONE Championship's DYNASTY OF HEROES, which takes place at the 12,000-seater Singapore Indoor Stadium on May 26.

While Khan admitted his decision to choose a career path less travelled has earned him the derision of naysayers, he is determined to prove them wrong by carving a successful career in the sport.

“I try to stay positive, but then sometimes people will talk and negative thoughts go into your head,” he stressed. “Some of them are sarcastic and mock me for taking the sport so seriously. They question if I can make a living out of it, and ask what happens when I’m old and have no other skills.

“So I tell them to watch me. In 10 years, let’s see who’s successful. I have my long-term goals in the sport and I’ll remain focused on achieving them. That’s the best way to prove my critics wrong,” he said.

Among Khan’s goals is to inspire others to pursue their dreams and passion wholeheartedly. In order to champion that cause, he knows that he will first have to show that he can reach the top and win a ONE Championship world title.

“My current goal is to be a world champion on a big global promotion like ONE Championship. What I hope to do is inspire people to chase what they love. I want my MMA career to be proof that if you have the passion for something, and if you’re good at it, you’ll be able to make a living out of it,” he ended.