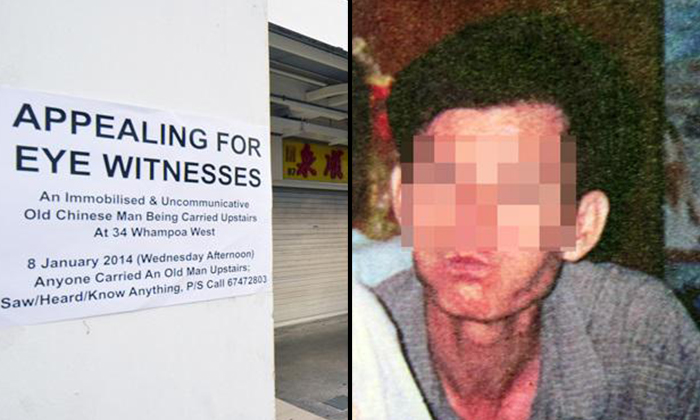 A 41-year-old man is actively looking for eye witnesses to an mystery incident that left his late dad paralysed three years ago in 2014.

The incident reportedly happened on Jan 8 in 2014 at Block 34 Whampoa West, and the man has since placed up notices at the void deck of the same block, asking for witnesses to come forth, reports Lianhe Wanbao.

Sadly, his father passed away from pneumonia in August 2015, a year and a half after the incident, without ever recovering.

The man told reporters that many neighbours have questioned why there were posters in the void deck asking for witnesses to an event that transpired three years ago.

He recounted what happened:

“Our whole family had intended to go for a reunion dinner, together with my dad who lived alone, but we got worried when he didn't turn up.

“So we went up to his unit and that’s when we realised something had happened to him."

They found him lying on the bed motionless with his pants were torn, while his hips were bleeding, and he seem to have suffered a stroke and was unable to talk, despite being conscious.

The doors to the apartment was also unlocked.

The man said that his dad was a healthy man but when the doctors did a checkup on him in the hospital after, they found that his heart and kidneys had been damaged, and his rib cage had also shifted; symptoms that weren’t caused by illness.

They managed to confirm with the victim that he had been involved in an accident based on sentences constructed by a blink test, but could not get more information, and thus were unable to lodge a police report.

He then decided to look for key witnesses to what may have happened by placing up posters in the void deck.

“I just want to uncover the truth.

“Even though my father may have passed, we still want an answer, and I hope that people will come forth with information.”

So far, no one had yet come forth.