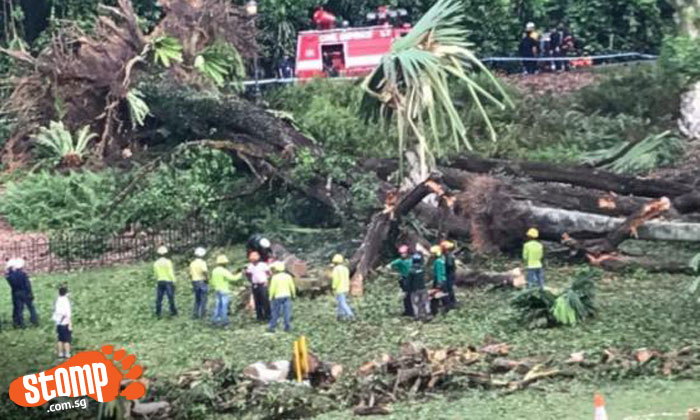 She first heard a loud, cracking noise above her. She looked up, only to find a 40m-tall tembusu tree falling fast in her direction.

Ms Tay Pei Lei, 26, who was having a picnic near the tree with two friends, got up in a flash and yanked one of her friends away from the falling tree.

All three narrowly escaped getting hit by the tree though Ms Tay dislocated her shoulder in trying to pull her friend to safety.

The civil servant was discharged from National University Hospital on Saturday.

Ms Tay and her friends were among the lucky ones.

Indian national Radhika Angara, 38, was killed after she was pinned down by the tree, which was more than 270 years old.

Ms Tay said she and her friends had chosen a spot where they could relax and chat.

That spot was about 5m away from Ms Angara's family, who were also having a picnic.

Ms Tay, who is not a regular at the Botanic Gardens, said she had not paid much attention to what the family were doing prior to the incident.

She noted, however, that it was windy that day.

After the tree hit the ground, bringing down nearby palm trees, she said there was panic as visitors scrambled and many rushed to help the injured.

Ms Tay estimated that there were at least 10 people who had a close shave.

Ms Tay, who was 5m from the fallen tree, said "everything happened too fast".

She added that she was surprised that such a large tree could collapse.

"I don't think anybody expected this to happen," she said.