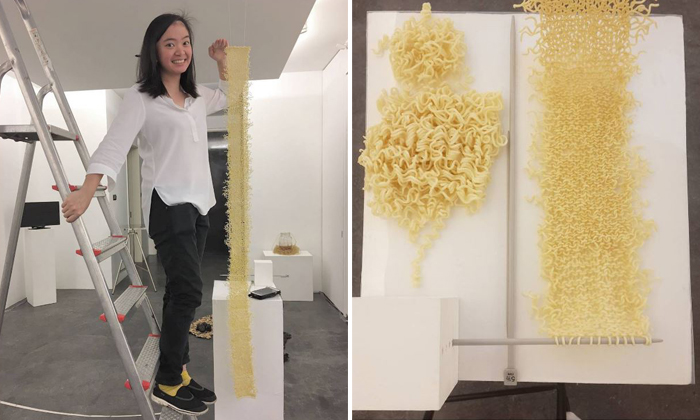 It's easy to assume Cynthia Delaney Suwito can't get enough of instant noodles.

Last month, the Singapore-based Indonesian artist sat for hours on end at a gallery weaving cooked noodles into a tapestry.

But it was only because she thought a little deeper and decided to transform regular packets of instant noodles into a work of art.

In a video interview with BBC, the 23-year-old said: "A lot of people say I'm obsessed with instant noodles, but I think the world is obsessed with it."

Contrary to the idea of instant noodles being a quick fix meal, Suwito's project "aims to slow viewers down" and "contrasts the concept of the preciousness of time", her artist statement read.

An eight-minute-long loop video projection on her website shows Suwito slowly and meticulously knitting pieces of instant noodles that she had boiled and cooled down beforehand.

And this is exactly what she was aiming for.

In fact, it took her three hours per day to knit a 20cm-long piece, the BBC reported.

The fine arts graduate from LASALLE College of the Arts told BBC that she wants to make a statement about instant gratification as she thinks a lot of people in this world want things "very fast and instant" in their lives.

Despite it all, Suwito said her attitude towards instant noodles hasn't changed and she still consumes it as how she did before starting on her project.