Should we be worried yet? Another tree falls, this time at Kim Keat Link 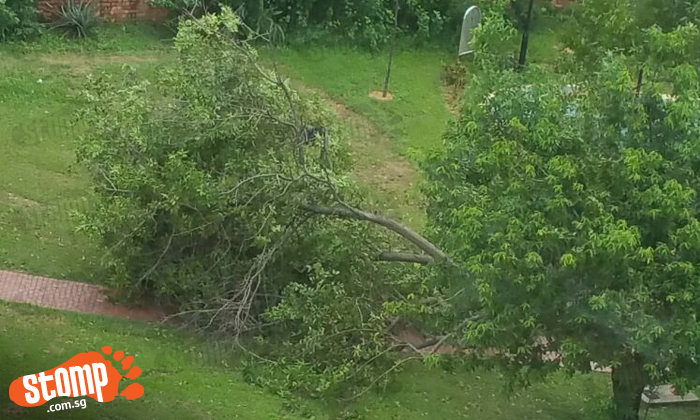 A Stomper was concerned after seeing the recent spate of fallen trees, and shared an incident he came across at Kim Keat Link at 3pm on Monday (Feb 13).

The Stomper had seen a fallen tree at an open field near the blocks at Kim Keat Link.

"It was not a rainy day, just very windy," added the Stomper.

"It was cleared in less than two hours."

The Stomper had noticed a spate of fallen trees in recent days, and decided to highlight this incident to Stomp.

The incident at Kim Keat comes just days after a falling tree left one dead and four injured at the Botanic Gardens on Sunday (Feb 12).

Her husband and two children were injured in the incident, along with a 26-year-old woman.

Subsequently, a 48-year-old woman was left seriously injured after being hit by a falling tree at Yuan Ching Road 2.30pm on Monday (Feb 13).

The woman was visiting a resident of the studio apartments in that area when she was hit by the falling tree at the carpark.

In yet another recent incident involving falling trees, Stomper Stanley alerted to Stomp to one that occurred at Upper Thomson Road yesterday (Feb 14).

Stanley said his cousin was driving along that road when the tree fell just inches away from a lorry driver.