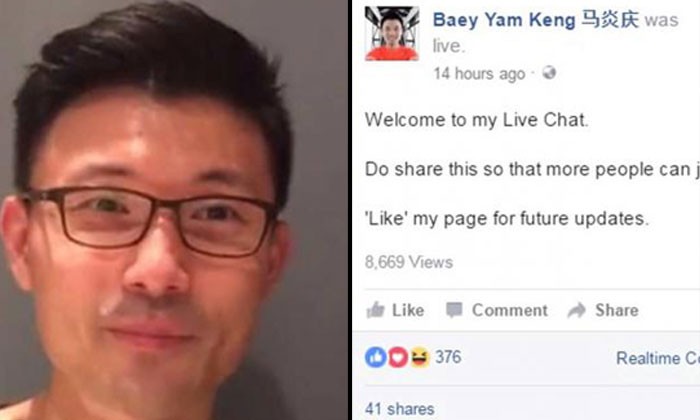 We now know what he does at work on a regular day, which hair gel he uses and what kind of his prata he likes best (even if he claims to not eat it often).

Member of Parliament for Tampines Mr Baey Yam Keng has been sharing nuggets of his personal life over live chats which he's been holding simultaneously on Facebook and Instagram.

The sessions, which last about an hour or so, are believed to be held in his home, and are conducted using his iPad and mobile phone, both propped in a make-shift manner using board game boxes.

Mr Baey started doing this late last year and typically holds the live chats on the first Sunday of every month.

The banter has been a mixed bag of serious talk on grassroots and Government issues as well as quirky insights into his personal life.

For instance, one Facebook user recently alerted him to potential danger to the public from wild dogs at Tampines Eco Green, an eco-friendly park in the neighbourhood.

He said that while it is unusual for the dogs to be in the area, authorities such as NParks generally tend to matters pertaining to the park.

He added: "Dogs...if you don't provoke them, they are fine. (what's) important (is), don't feed them. Let them run wild and unless they're aggressive, we welcome them as part of the eco system."

Social media users who engage him hail as far as Europe and have been known to ask him all sorts of questions including what time he goes to bed each night.

Mr Baey, who turns 47 this year, is also Parliamentary Secretary at the Ministry of Culture, Community and Youth (MCCY).  For the record, he typically goes to bed at midnight and wakes up at 6am.

He candidly said on his most recent live chat last Sunday night (March 5): "I'm luckier than some of my colleagues. They do sleep late."

Mr Baey responded: "I've shaved off my goatie. After a while, I had decided to do without it. It's a personal choice so i've been getting very positive comments as well.

"With or without goatie, it's still me, so I hope you can still support what I'm doing in the community, what i'm doing in MCCY."

Most Singaporeans might still remember him as the selfie king among younger Singapore politicians but it seems this digital savviness has also earned him brownie points for choosing a live platform to connect with his constituents.

It's important to know that he didn't have it working so well for him from the get-go though.

Well, let's just say there were some minor technical issues (see below) which he sorted out quite quickly, all thanks to real-time advice from netizens. Oh and by the way, he's still taking selfies and sometimes wefies too, like this very recent one: