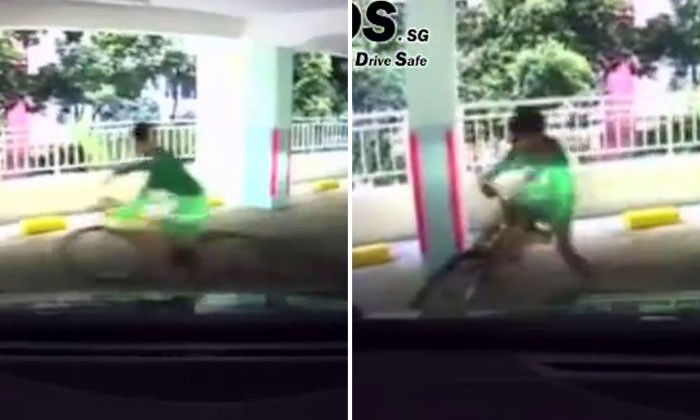 There are many places for cycling in Singapore -- and a multi-storey carpark is certainly not one of them.

A video circulating online however shows two cyclists doing exactly just that at a multi-storey carpark in Tiong Bahru on Dec 8 at around 3.49pm.

In the 23-second video that was posted on Roads.sg, a car can first be seen going up a ramp in the carpark.

As the driver was making a right turn after reaching the end of the ramp, a teenager suddenly cycled past the front of the car after riding down an adjacent ramp.

Both the driver and the cyclist then pressed on their brakes, narrowly avoiding an accident.

The cyclist rode away thereafter.

Towards the end of the video, both the teenager and another female cyclist who looked younger than him can be seen going against the flow of traffic by riding down the ramp the car had just ascended.

"These two teenagers need a lesson on safe riding.

"A multi-storey carpark is not a place to go against traffic around corners.

"I cannot imagine if the boy had gone straight and fallen over the railing."

Related Stories
Do you think driver of SGD7119S deserves to be on the road? Watch this road rage video
Life is cheap for driver of SKG5034, who nearly caused accident after 'forced' overtaking at Changi Coast Road
reckless
accident
bicycle
cycling
dangerous
Tiong Bahru