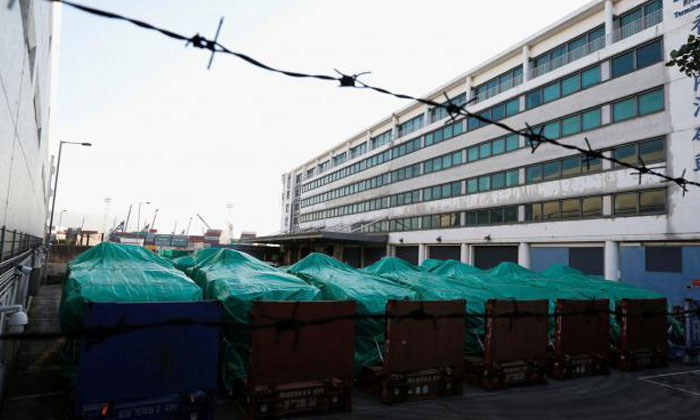 The nine Singapore armoured vehicles that have been detained in Hong Kong since November have been moved indoors, Hong Kong's Customs and Excise Department said on Tuesday (Jan 3), quashing speculation the vehicles may have been returned.

A report by the Apple Daily newspaper on Monday (Jan 2) said the vehicles, which it said had been kept at an outdoor storage yard of a Customs storage facility in Tuen Mun, had "vanished" from the site that morning.

But the Hong Kong Customs and Excise Department said in a statement issued to The Straits Times on Tuesday the vehicles "are still kept at a storage place of Customs in Tuen Mun".

"They have been stored indoors since December 6," it said in the statement.

"As the case is still under investigation, no further information is available," it added.

On Nov 23, the Hong Kong Customs detained the nine Terrex vehicles that were on board a container ship that was in transit in Hong Kong.

They were being shipped to Singapore following an SAF military exercise in Taiwan. Hong Kong Customs said it had impounded the shipment because vessel owner APL had failed to provide appropriate permits for the vehicles, the South China Morning Post reported.

Singapore Defence Minister Ng Eng Hen said on Dec 30 the Singapore Armed Forces will learn from the incident and has already changed its practices to better protect Singapore's military assets.

Dr Ng , writing in a Facebook post, added that all levels of the Singapore government had been working hard over the past two months to get the Terrex vehicles returned to Singapore "quietly and out of the limelight where it is more effective".

Related Stories
SAF vehicle seizure: Singapore will not allow any single issue to hijack ties with China, says Vivian Balakrishnan
Man in China buys luxury car with coins and small notes -- leaving staff to count them for 12 hours
Man loses 30,000 yuan in gust of wind but bank workers and passers-by help him pick it all up
Hong Kong
China
relationship
relationships