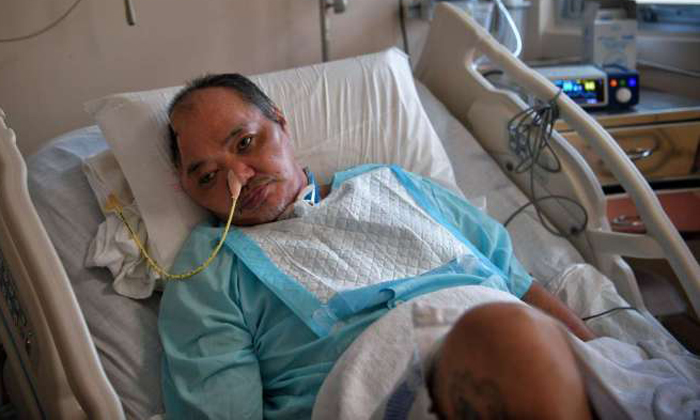 Retiree Lim Chwee Leong, 64, woke up from his coma on Wednesday (Jan 11), two months after he fell backwards at an escalator at Bishan MRT station.

The incident was among 60 plus others that took place late last year (2016) and cast a spotlight on the safety of the elderly in using escalators.

When The Straits Times visited Mr Lim at Tan Tock Seng Hospital on Wednesday (Jan 11) evening and chatted with him, he was able to nod in response to simple questions. He was also able to move his right leg and hand slightly.

It was the first time Mr Lim had spoken since the accident near the MRT station's exit D on Nov 12.

His 46-year-old son, Mr Lim Ka Hock, told ST that he received the "good news" in the afternoon through a phone call from his father's girlfriend from the hospital.

"She was yelling in his ear, telling him about how so many people have been helping us," he said.

"He will need more time to recover, but I am overjoyed to hear this good news."

Mr Lim said his father had told the girlfriend that he remembered he had a fall at the MRT station.

"As for his memory of other things, he will still need some time, but we are hopeful," he added.

There were 63 accidents involving escalators in November and December, according to figures from the Building and Construction Authority (BCA) last month (Dec).

Nearly four out of five such accidents involved those aged above 60.

Several people have reached out to Mr Lim's family after reading about the incident to offer money and food, including canned items and biscuits.

Non-profit organisation The Ray of Hope Initiative (ROHI) has also started an online fundraising campaign to raise $4,600 for his father's nursing home fees for two months. About $1,410 has been raised to date.