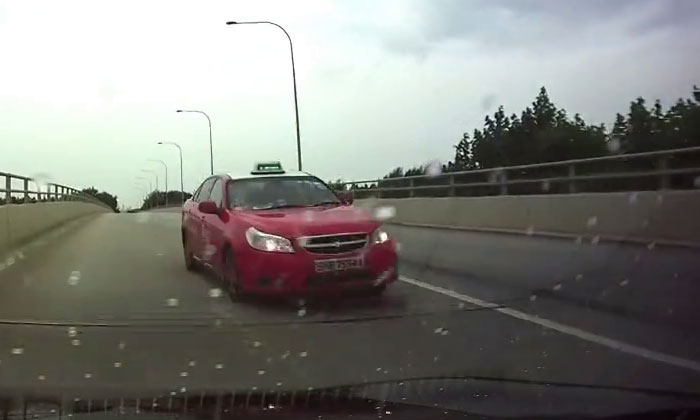 A video circulating on Facebook shows a cabby almost getting into accident after driving against the flow of traffic along Seletar West Link.

According to the timestamp on the video posted on Beh Chia Lor - Singapore Road, the incident took place on Feb 2 at 5.49pm.

The video first shows the driver who recorded the footage driving his vehicle on a one-lane road.

A taxi then emerged against the flow of traffic.

Based on the video, the cabby seemed like he or she wanted to overtake a car, and did so by driving against traffic.

The driver had to slow down and swerve his car left as the taxi was approaching. He said that the cabby also had to swerve his or her taxi last minute to avoid an accident.

"I would like to share this video for awareness on a taxi SHB7534A driving against traffic at high speed along Seletar West Link.

"I almost had a head on collision with the taxi. I was preparing for the impact and felt that I almost died with no where to run.

"Luckily the taxi driver managed to swerve away last minute."

Over the past month, Stomp has posted a series of stories showing similar incidents after a motorist was killed by a Mercedes driver who went against traffic on the AYE.

For their safety as well as the safety of other road users, we hope such reckless acts will not be repeated in future.

Have a look at the incident on Seletar West Link as well as other similar incidents below.