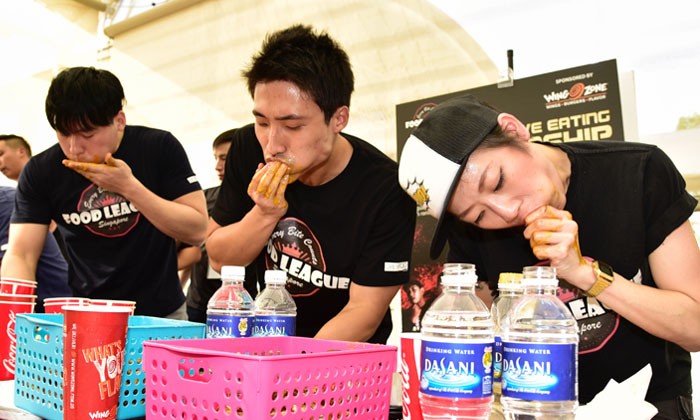 His winning technique for the mid-joint of the wing, involved cracking its tip, sliding the flesh downwards to form a "meat umbrella" and then shoving the meat into his mouth in lightning speed.

Mr Neo said: "Chicken wings require a lot more technique. It's the first time I've eaten so many but I'm only 40 per cent full."

Mr Neo trumped seven other competitors including Ms Sarah Ow, 29, who had featured in a viral Food League Singapore video last month where she devoured eight bowls of lor mee in 17 minutes.

Ms Ow came in second at Saturday's event which was held outside the Wing Zone eatery in Buangkok. She finished 88 chicken wings in the same time.

Food League Singapore was set up last year by competitive eating enthusiasts in a bid to standardise contests and introduce a national ranking system across the island.

Its founder Mr Sean Lee, 35, a sales executive, said food eating competitions started gaining some interest here about nine years ago. Mr Lee himself has a personal best of eating 82 wantons in 12 minutes.

He said: "The league's aim is to ensure that aspects such as timing and safety are standardised across all contests to elevate the level of competition and minimise disputes."

For instance, at Food League events, organisers ensure that paramedics are around. The "governing body" also picks safer food for contestants to consume, avoiding sharper parts such as wing tips.

The league plans to run such events once every quarter and will be recruiting contestants across the island.

Ms Ow, who is a member of the league, believes the organisation can help to put Singapore on the competitive food eating map which is dominated by countries such as Japan and the United States. She said: "It will help to generate more interest and recognition for the activity. It's like participating in a sport - I feel a thrill whenever I'm competing."