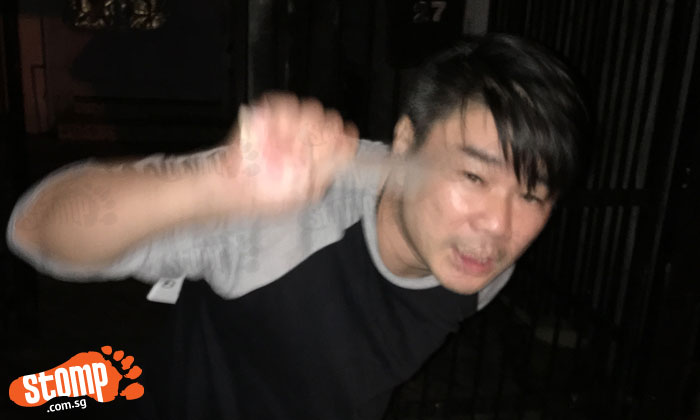 Stomper Lim was shocked when his 62-year-old father who is a taxi driver shared his encounter with a rude and arrogant passenger on Apr 27.

According to Lim, his father picked up the passenger at Golden Mile Complex and dropped him off at 27 Jalan Chermat.

Everything went smoothly up until the passenger refused to pay the fare which was approximately $15.

"He then tapped my dad’s hands with his hands and took that as a ‘payment’," said Lim.

"My dad refused him to get out of the car as he hadn’t paid up.

"The passenger shouted 'I don’t want to pay, CALL THE POLICE!'"

"The passenger went berserk and created a ruckus in the car, provoking my dad to call the police, and started peeling the ID tag off the windshield, which he claimed to use it for ‘evidence’."

As the situation escalated, the Stomper's father decided to exit his taxi and approached two passers-by for assistance.

The bystanders told the passenger to return the cabby his ID Tag and to just pay the fare.

Lim's father added that he would forget about the whole incident as soon as he received the fare and his tag back.

However, the passenger refused claiming how proud he was of being an ex-convict and how rich and capable he is, adding that he owns a multi-million dollar property and is 'above the law'.

The passers-by informed Lim's father that the passenger was the owner of a stall along Lorong Lew Lian.

Lim said that two policemen arrived at the scene shortly after and persuaded the passenger to pay up or else he would be charged.

That was when he finally returned the cabby his tag and paid the fare using NETS.

"He purposefully keyed in the wrong PIN repeatedly and blame it on the card-reader. He then took out another card and proceeded with the payment, this time round, successfully on the first attempt," said Lim.

"In the end, the payment went through and he smirked and told my dad, whilst in front of the police officers, saying he did that on purpose so to waste my dad’s precious working time."

Upon hearing his father's story, Lim was grateful to the two bystanders who stood up for his dad.

However, he hopes to bring more attention to taxi drivers who encounter abusive and aggressive passengers who evade taxi fares.

"I came across similar incidents on the news and always prayed that these events shall never happen to my dad," said Lim.

"I want to advocate and urge passengers not to abuse the taxi drivers.

"Fare evasion is as good as theft.

"Taxi drivers are also someone else’s family member and could be the sole breadwinner.

"Respect is mutual, and what goes around comes around."

Related Stories
Man blocks path of taxi with passenger inside -- all because of an argument
Man argues with LTA officer over his e-scooter -- then takes things to the extreme by trying to destroy it
Passenger and Grab driver have shouting match after she calls for Uber, but boards wrong car
dispute
argument
rude
passenger
cabby
taxi driver
evade fare
evade taxi fare