Netizens aren't impressed with $17.50 'fish and chips' from Marina Bay restaurant -- and neither is Gordon Ramsay 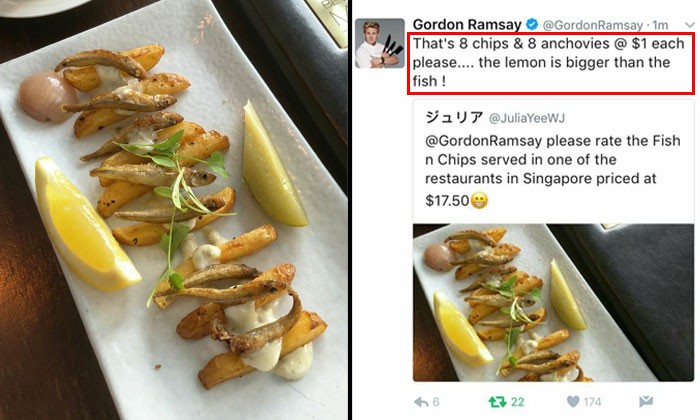 A photo showing a plate of 'fish and chips' purchased by netizen Jaze Phua at $17.50 from restaurant LeVeL33 at Marina Bay Financial Centre went viral on social media recently.

The photo of the dish posted on Facebook is a far cry from what one would usually associate with fish and chips.

Instead of a thick fish fillet with a huge serving fries at the side, the photo shows eight pieces of fries topped with small fish that resembled ikan bilis.

The restaurant lists the fish as whitebait in its menu. According to The Straits Times, whitebait refers to the fry of fish, and it is commonly deep-fried and eaten whole. In restaurants here, it is often on the appetiser or bar bites menu as a snack.

There was a slice of lemon on the plate too, in case customers wanted to add a little more flavour into the dish.

Said the netizen in a caption accompanying the photo:

"So, I happily ordered 'Fish and Chips' at Level33 in MBFC. At first, I thought this is just the appetizer. Turns out this is the SGD$17.50 dish.

"I almost died from laughing with internal-organs-explosion. It's like buying a Car and instead they give you the Toy Car for the same price."

For obvious reasons, netizens reacted hilariously to the Jaze's 'fish and chips'.

"At least the lemon size is right."

"OMG EPIC HAHAHAHHAHAHAHA I had to zoom in and see."

One even took things one step further.

Surprisingly enough, the celebrity chef responded with a rather savage reply.

For their own sake, let's hope Masterchef contestants do not come up with something like that in future.

Related Stories
Buyer swaps seller's original Rolex with fake during viewing, then tries to run away when confronted
Nothing wrong with being rich -- but these kids will get on your nerves
funny
hilarious
food
Gordon Ramsay
Marina Bay
expensive