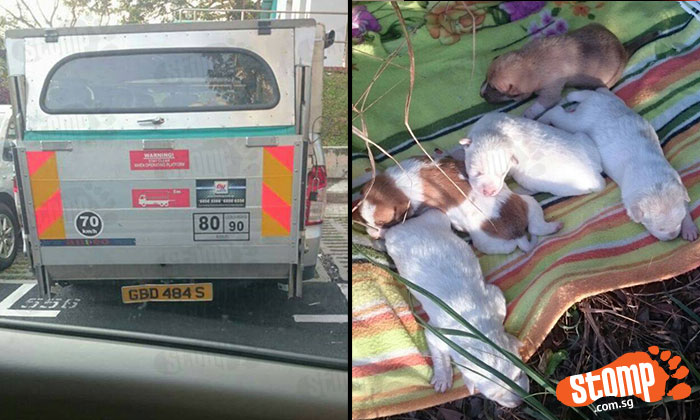 A friend of Stomper Shariff’s wife found a litter of five puppies inside the compound of a company at Tuas Bay Street on Wednesday (Feb 8) at around 6.30pm.

Enlisting the help of the Shariff and his wife, the three relocated the litter to an open field next to the company, after finding out that the pest control had been called in to dispatch of the dogs.

Said Shariff: "We made sure that the mother dog was behind us and knew where the puppies were going."

The trio bumped into a elderly colleague of Shariff’s wife and her friend along the way and the four of them decided to place the puppies under a cluster of trees, even placing some food for the mother dog and an umbrella to shelter the family from rain before leaving.

Shariff and his wife came back to check on the puppies the following day (Feb 9) and they were in the same spot the four had placed them a day earlier.

However, on Friday, the elderly colleague informed Shariff’s wife that a man driving a pickup truck had taken the puppies from the spot.

According to an account by the elderly colleague, the man told him that he was intending to put the puppies up for adoption -- something which Shariff found highly suspicious, given that the puppies' eyes were still closed and were not weaned off their mother’s milk.

After learning of the pickup truck, Shariff’s wife asked around and found a photo of the pickup which was circulating on dog lovers group, claiming that a person was going around taking stray puppies from their mothers.

When she consulted her elderly colleague, he confirmed that the pickup truck in the picture was the same as the one that the man drove.

Shariff added: "These puppies still haven’t opened their eyes but are already separated from their mother.

"It’s also puzzling how the man got to know about the puppies. Did someone else inform him?"