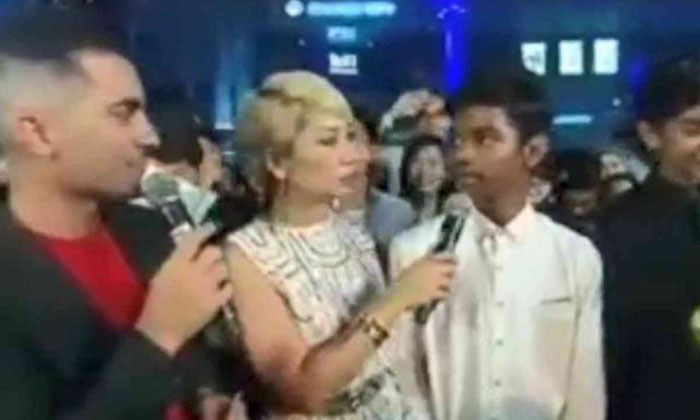 Ladies and gentlemen, Singapore has a new social media sensation.

He didn't have to win any gold medals in sports and didn't do anything extraordinary, to the best of our knowledge at least.

Instead, he was just being himself.

Meet Ganesh, a teen who attended the New Year's Eve Countdown at Suntec City and found himself unwittingly thrust into the social media limelight for telling everyone on live national TV what his highlight of 2016 was.

Firstly hosts Mike Kasem and Vernetta Lopez seemed at a loss when they momentarily could not find an audience member to take the mic and say what their most memorable event in 2016 was.

The crowd retreated in typical Singaporean-fashion, with an exasperated Vernetta Lopez asking: "Somebody?"

For that one second, anxious Singapore viewers were glued to the screens, hoping for a saviour to save the day.

And that was when Ganesh emerged.

Boldly stepping up to speak into the mic, Ganesh told Lopez: "Going out with my friends (was the highlight of 2016)".

"Going out with your friends was the highlight? You kept indoors or what," Vernetta Lopez asked.

Clearly nonplussed, Kasem threw him a line, hoping to steer the boy in the right direction (and do some damage control) on national TV: "All right. How about something involving a swimming pool, might have been a highlight for us in Singapore?"

The brave boy clearly didn't get the hint, or from the looks of it, simply couldn't care less.

Ganesh said in a completely deadpan manner: "I went to my friend's house. He is living in a condominium so I went there for swimming with my friends."

Hold up. Pause for just one second and think about what just happened on TV.

This was gold. And this is what Donald Trump meant when he said: "We have to stop being so politically correct." In a way.

Meanwhile, Ganesh's friend standing behind him went off on a selfie frenzy before giving his buddy a handshake for telling it like it is on national TV.

"You know what? Whatever the highlight is for you, that's fantastic," Vernetta Lopez said, clearly amused.

"Absolutely. I was thinking Joseph Schooling for me," said Mike Kasem.

The clip was posted on Facebook by user Justin Hui, who wrote: "Singapore went into 2017 in the most cringe-inducing way."

Anthony Theophilus Loon commented on Facebook: "Highlight of 2016. He might have misunderstood the question. Pretty much summed up the year."

"Officially never calling him over to swim at my condo," another Facebook user Shaun Gill quipped.

Watch the video from one minute onwards.