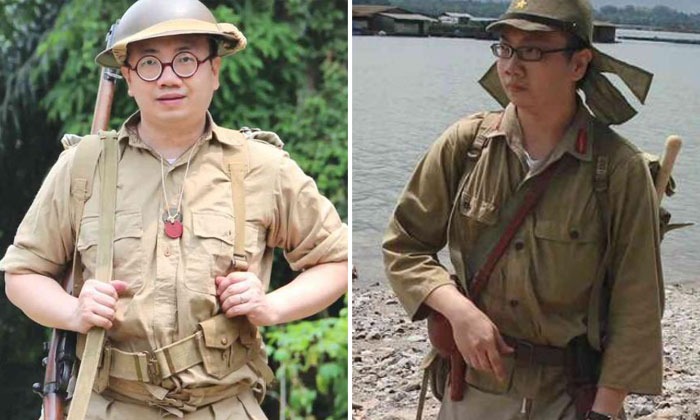 At first glance, it's easy to mistake Mr Alvin Lee's HDB flat in Punggol for a Singapore Armed Forces (SAF) museum of sorts.

It is a treasure trove of military paraphernalia lovingly collected for more than two decades that has set back the 35-year-old teacher some $80,000.

Of that amount, Mr Lee spent about $8,000 on items from the Singapore Army.

And his quest for more collectables is far from over.

When the opportunity came to go big on his hobby, he seized it: His parents-in-law moved out of his house in 2014 and Mr Lee immediately trained his sights on their vacated bedroom, filling it with military gear ranging from the first generation Temasek Green SAF combat uniform to the currently-used one with a pixelated design.

"I invaded the room and took over it," Mr Lee said with a wry grin.

"Space is indeed a big constraint. I keep everything mostly in storage boxes. I try to find whatever space I can find to put the stuff in," he added.

She chimed in: "Maybe we have to buy a new home soon."

In the living room, a wedding photo of the couple hangs on the wall, serving as a precursor to his extensive collection.

In the framed photo, Ms Tan is decked in a beautiful bridal gown, while Mr Lee is clad in - no surprises here - a World War II (WWII)German army officer uniform.

In his master bedroom, only his finest military memorabilia are on display.

"My wife allows me to display just a few items, so it's limited to a few mannequins and a small display cabinet," the military buff lamented.

Not surprisingly, Mr Lee is friends with some of the stallholders at Beach Road army market, which is his first-stop when it comes to sourcing SAF items.

Mr Lee said: "When I heard that Beach Road was closing down, I asked the sellers there: 'Do you want to sell me your items? I have space for them. I can even help you to keep your unsold stock until Beach Road reopens eventually."

In the years before 2015, there were rumours that the army market, which for decades sold items for everyday military use to generations of national servicemen, would close as the shopkeepers' 20-year leases expired on Dec 31, 2015.

As ownership of the stalls reverted to the government, stallholders operated as tenants, and it was business as usual for the army market.

Mr Lee said: "From Asia, there are Malaysians, Taiwanese, Japanese, and Thais. I also have a lot of Americans friends, British, even French people who are collectors of our military items."

"I understand their position because they want to collect something aside from (the gear from) their home country, so I am there to bring it back to Singapore - where it should be," he added resolutely.

However, there are many replicas and potential fakes floating in the market, which takes expertise and knowledge to differentiate - something Mr Lee has accrued after an early start in primary school when he took up a hobby of building plastic model kits.

It piqued his interest in collecting military memorabilia.

He said: "I thought that the figurines looked very cool. And I thought I should try to get a life-size helmet or uniform. I tried to collect small items at first. Lo and behold, the collection grew."

However, his love affair with local military items only started after he enlisted for National Service (NS) in June 2002. When he completed his NS, Mr Lee met his second love: Ms Tan.

"My friend introduced us, and he told me that (Alvin) likes all these things. I wasn't really warned but was just told to be prepared that he has all these weird collections," said Ms Tan.

"I thought he was a bookworm, so it was quite a shock to me," the homemaker laughed.

Explaining his collection, he said: "I collected the uniforms and equipment of WWII including the uniforms of the Germans, the Americans, and other European combatants. I then developed an interest in the British and the Japanese because they were the ones here in Singapore history.

Mr Lee, who holds the NS rank of a Captain, said: "Later, I thought: Why not try to find out even more about our army?"

"Since I've done my national service, I thought I should dwell into the history of our national service and its beginnings. That's when I branched out to collect items of the Singapore Armed Forces."

Mr Lee also draws inspiration from WWI and II shows, such as Band of Brothers and Saving Private Ryan, which he watched twice on the big screen when it was released in 1998.

He said: "I was amazed at how the director managed to portray the soldiers very accurately. Not just in terms of their feelings, but also the things that they wore.

"To me, it is what you see on the soldier that tells a very big story."

While Mr Lee did not become a regular officer in the Singapore Army, he still relishes the opportunity to educate his peers about the SAF.

"My peers commented I was 'siao-on' in collecting the uniforms. A lot of soldiers don't know the meaning and purpose of why their uniforms are worn in a particular manner, or what the badges mean," Mr Lee said, using the colloquial phrase for 'obsessed'.

As an NSman, even his Commanding Officer was surprised by his zeal, and would ask him to showcase his uniforms and conduct national education lessons during in-camp training stints.

Mr Lee has also showcased his collection at schools and local museums, such as Memories at Old Ford Factory and Reflections at Bukit Chandu.

The holy grail of local military memorabilia is the uniforms and insignia worn by the SAF generals, he says, and they are items that Mr Lee is unable to get his hand on.

Mr Lee said: "I understand that these are not available for sale anywhere and it is so difficult to obtain them."

"If I see the Chief of Army right now I would salute him and then I ask him: 'Sir, can I buy some of the stuff you are wearing. Please? I will keep it in good condition, and I will name it after you. I will label it very nicely.'"

The question now is, whether Mr Lee will ever decide to part with his collection.

Without hesitation, he said: "No, I will never sell it. Because it took me such a long, long time to collect all these items and to sell it away just like that - I will be left with nothing.

Unfortunately, it can be a lonely hobby to have in Singapore, where there aren't many serious collectors, says Mr Lee.

"If I were to participate (in re-enactments), I want to take part in the Normandy landings," Mr Lee said, referring to the Allied invasion of France which marked a turning point of World War II.

"(I want) to gear up as a US airborne paratrooper - even though I wear glasses. It's fine. It's to get the experience firsthand - feel the load, feel the weight, feel the fatigue - and I will bring my wife along also."