Man who knelt in front of GF: "When a man loves a woman, he'll do unexpected things" 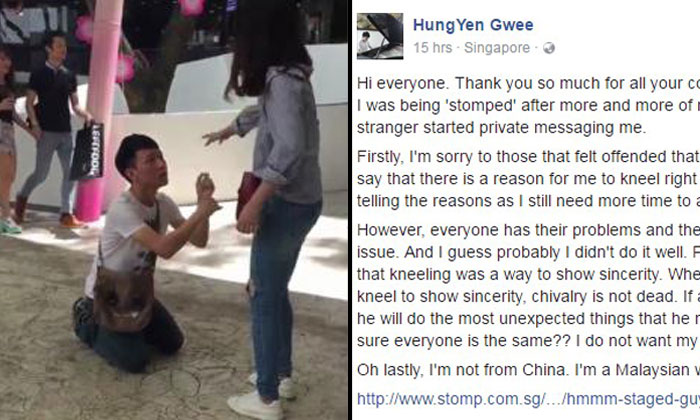 A guy, who was filmed on his knees and begging his girlfriend for forgiveness in Orchard on Feb 12, has spoken out about his actions.

Stomp was alerted to the video that was circulating online by Stomper Lin.

In the clip, the man is seen getting pushed to the ground before going on his knees to plead with his girlfriend.

He hung his head in shame as his partner continued to scold him over something he had done.

Several netizens reacted to the video wondering why the guy was still desperate to stay with his girlfriend despite the way she treated him.

Some thought he was a 'disgrace' to men while others wondered if the incident was staged.

Although he did not divulge the reason why he got on his knees, he defended his actions and said that it demonstrated his sincerity and chivalry.

HungYen Gwee, who is a Malaysian working in Singapore, wrote:

"Thank you so much for all your concern. I was just aware that I was being 'Stomped' after more and more of my friends, family, and even stranger[s] started private messaging me.

"Firstly, I'm sorry to those that felt offended that I [knelt] down. I just want to say that there is a reason for me to kneel right before her. (Sorry I won't be telling the reasons as I still need more time to accept the truth).

"However, everyone has their problems and their ways of settling their issue[s].

"And I guess probably I didn't do it well.

"Personally, at that time I felt that kneeling was a way to show sincerity.

"When people propose they also kneel to show sincerity, chivalry is not dead.

"If a man truly loves a woman he will do the most unexpected things that he normally won't do.. I'm pretty sure everyone is the same??

"I do not want my ego to ruin our relationship."