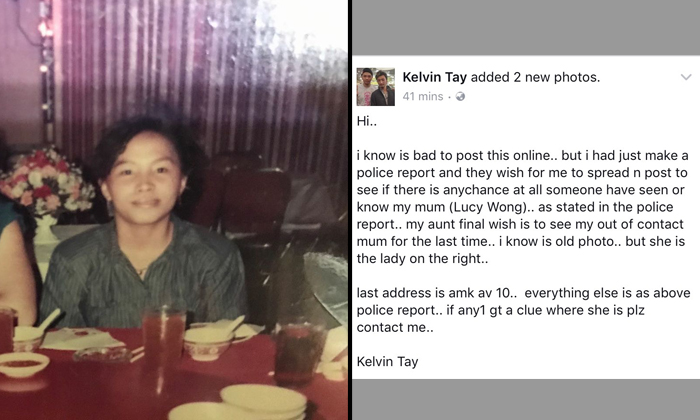 Stomper Uvuvwevwevwe alerted us to his friend’s search for his missing mother in order to fulfill his aunt’s last wish to see her again.

His friend, Kelvin, posted an appeal for help on Facebook yesterday (Jan 16). His aunt was diagnosed with end-stage cancer last November, and she wishes to see Kelvin’s mother, Lucy Wong, one last time.

Kelvin has not seen his mother in five years, after she moved out and remarried.

According to the police report in Kelvin’s Facebook post, he last saw his mother at her new residence at Blk 410 Ang Mo Kio Ave 10 in 2012.

Her phone number has changed, and Kelvin and his relatives are unable to contact her. He is unaware if she has left the country or moved house since he last saw her.

Kelvin’s original Facebook post can be found below. His mother is the lady on the right of the photograph.

Related Stories
Son searches for biological father who worked in Singapore in the 1990s
Sold for $400 by parents, but woman's love for family is still priceless
Girl whose mum was adopted needs your help to find her bioligical family
missing
find
help needed
cancer
lost
appeal
family
mother and son
mother
looking for