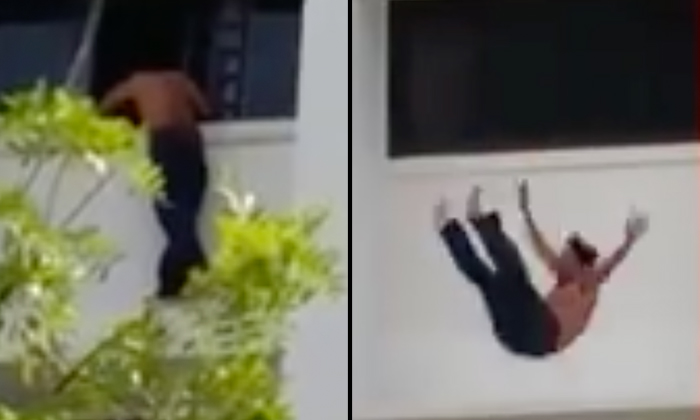 Stomper A alerted Stomp to a video that is currently being circulated on Facebook, showing a man hanging on a ledge outside the windows of a HDB unit, before plunging down and landing on a life-pak inflated by the SCDF below.

The incident reportedly happened yesterday (Jan 27) at around 2.30pm and the subject is understood to be a Malay man in his thirties.

Stomp has reached out to Singapore Civil Defence Force (SCDF) regarding the incident and their official statement reads:

“SCDF received a call for assistance at around 3.00pm yesterday (Jan 27).

“A Malay man in his thirties had locked himself inside one of then bedrooms of the HDB unit.

“SCDF set up a life-pak on the ground floor directly below the bedroom window.

“The subject fell while SCDF was setting up a rescue net from the unit above and he landed on the fully inflated life-pak.

“The subject was assessed by the paramedics at scene and was subsequently conveyed to the Changi General Hospital (CGH).

The Singapore Police Force (SPF) has also issued an official statement, saying that on Jan 27, 2017, they were alerted to a case of attempted suicide at Block 903, Tampines Avenue 4.

They confirmed that a 39-year-old man was arrested in relation the case, and that police investigations are ongoing.

Related Stories
Horrifying footage shows man 'sliced in half' as train runs over him -- and then he miraculously gets up and walks away
Hong Kong model live streams suicide attempt on Facebook: "I hate myself"
18-year-old student attempts suicide in Hong Kong after getting raped by Tinder date
suicide attempt
police
SPF
Civil Defence
scdf
Tampines