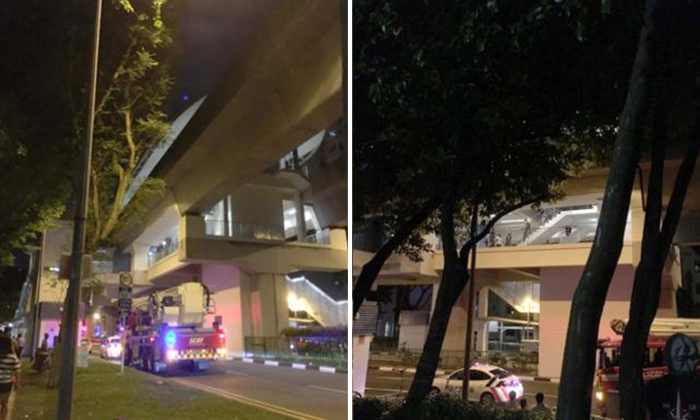 The "loud boom" heard by residents along the Sengkang LRT system on Friday (Feb 10) night was not an explosion but a power outage, The Straits Times understands.

ST understands that no one was hurt in the outage.

One of the passengers on the train, who gave her name only as Mrs Lim, told ST on Friday night that the train was quite empty, with fewer than 10 people.

She was with her husband and two children on the train, from Kangkar LRT station towards Bakau LRT station.

About halfway through, it started bumping violently, she said.

"There were a lot of sparks. The air-conditioning went off and some of the lights as well," said the 40-year-old, who works in the education sector.

They tried contacting SBS Transit staff through the intercom, but communications were breaking up on the system, she said.

Her husband and another man in the train opened the emergency door and the commuters self-evacuated.

Eyewitness Haziq Rahmat Ali, a 20-year-old student, told ST on Friday that he was in his room at 8.10pm when there was "a huge flash of light", followed by a loud boom.

"I thought it was lightning," said Mr Haziq, who lives  at Block 123B, Rivervale Drive, adding that the Singapore Civil Defence Force and the police arrived soon after.

According to Mr Haziq, an LRT train was stuck and commuters had to evacuate on foot.

SBS Transit said in a tweet at 9.10pm that there was no service on the Sengkang LRT East Loop due to a power fault.

Commuters had heard a loud sound near the Bakau station around 8pm, media reports had earlier said, with some mistaking it for an explosion.

Ms Tammy Tan, senior vice-president of corporate communications at SBS Transit, told ST that train services on the Sengkang LRT system were down at 8.04pm due to a power fault.

Power was switched off on the Sengkang East loop for checks. Free bus rides and bridging bus services were available during the disruption.

"We are investigating the cause of the fault. We apologise to affected commuters for the inconvenience caused," she said.