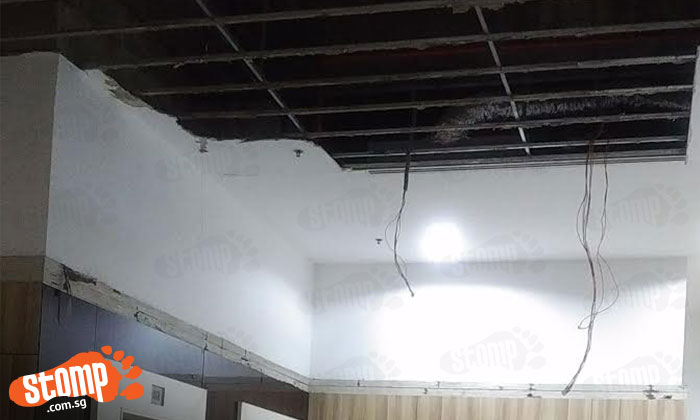 Stomper M was shocked to find that the lobby ceiling of the International Business Park at Jurong East had collapsed yesterday (Mar 14) at 6.45pm.

From the photo that M submitted to Stomp, it was observed that a large part of the ceiling board had fallen off, exposing the metal beams beneath.

According to M, no one was hurt with the exception of a security personnel who reported being giddy and was sent to a hospital for a check-up.

"When I got to the place, the ceiling had already fallen.

"No one was hurt.

"I think it was a suspected case of termites, but the case is still under investigation."

The Singapore Civil Defence Force (SCDF) has issued an official statement on the incident:

"SCDF received a call for assistance at about 7.45pm yesterday.

"One ambulance was sent.

"A man in his sixties was conveyed to Ng Teng Fong General Hospital for treatment."