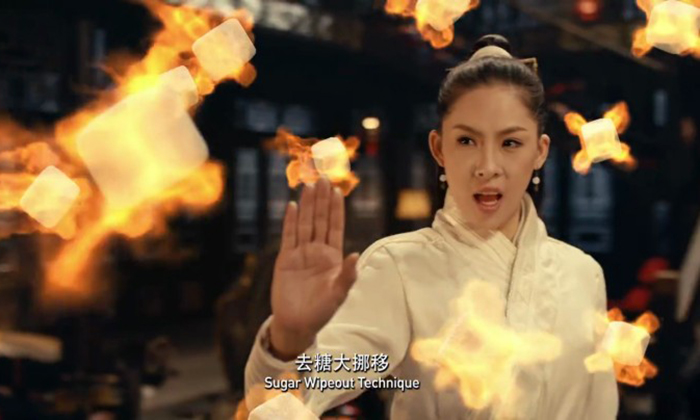 As Chinese New Year approaches, there is no lack of celebratory videos aiming to entertain the online audience.

However, one video clip posted on Gov.sg's Facebook page on Saturday (Jan 21) has captured netizens' attention while relaying an important message.

In the video, the heroine 'Guardian of Health' saves unwitting diners from feasting on an unhealthy meal in a slick Chinese martial arts flick.

She battles the 'Sugar Arch Villain' and his cronies, highlights the high sugar content in some popular Chinese New Year dishes, and uses her skills to reduce the amount of oil, salt and sugar in them.

While some Facebook users are saying that the video is putting a dampener on festive spirits, many have praised the creativity shown in a clip that shows people how to make healthier food choices during the holidays.

One user wrote: "Some people here commented that this ad spoiled the mood of CNY. Well, keeping fit and healthy compared to joyous mood for eating unhealthily - which is important?"

"Laugh all you want but Singapore has the second highest diabetes rates in the world," another user wrote.

Other users also praised the quality of the video clip, with one saying: "When you realise this is better than Mediacorp shows."

Related Stories
Student's fake commercial is so good he got offered a job
This Norwegian Airlines ad just won the Internet
So they say creepy auntie at Mandai is Maggi ad... but look what happened to our computer when we watched new video
creative
advertisement
pr stunt