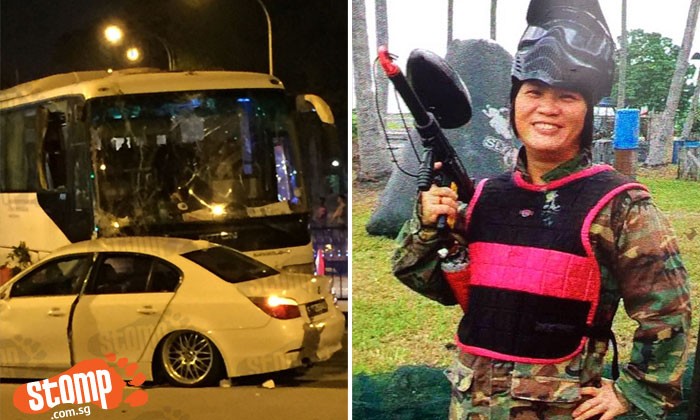 Ms Wong Lai Cheng, 47, was killed while cycling home from Nanyang Technology University (NTU) after getting hit by a bus along Pioneer Road North and she was known as someone who would greet neighbours as she was frequently seen around the neighbourhood on her bicycle.

She lived only 2.2km away from NTU and worked as a hall operations assistant on the campus.

Stomper Karl alerted Stomp to an accident which involved a private bus which crashed through a road divider before hitting a few cars, including a white BMW four days ago (Jan 12).

Ms Wong's husband and teenage daughter rushed to the scene and were comforted by relatives.

A neighbour of the deceased told Lianhe Wanbao via The Straits Times that she often bought leftover produce from a friend who sold vegetables and handed them away to others.

The neighbour described her as an optimistic person.

According to The Straits Times, her nephew said that the family was still in shock.

He added, "It was her usual route home from work. It is so sad that she is gone just like that."