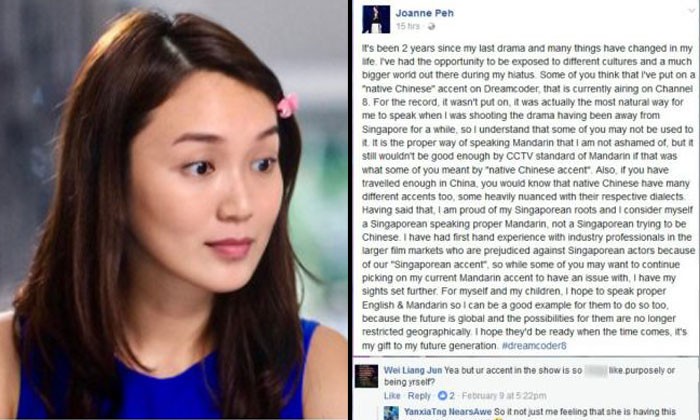 Two years since appearing in her last drama series, Singapore actress Joanne Peh is back in a new Channel 8 project and tackling criticism of her performance head on.

Ever since the drama debuted on Feb 7, some viewers have noticed something different about the way the 33-year-old delivers her lines.

Some puzzled viewers took to Internet forums and Peh's social media pages to question why she speaks in what they say is Chinese-accented Mandarin.

On the forum pages of HardwareZone.com, some netizens also suggested that her accent was influenced by her husband and fellow actor Qi Yuwu, who hails from Guangzhou, China.

Now Peh, who plays a jilted housewife in the new Mediacorp drama Dream Coder, is retorting those accusations on her social media accounts.

In an update posted on Feb 12, the actress said that her accent "wasn't put on", and explained that "it is the proper way of speaking Mandarin that I am not ashamed of". She also said that she was proud of being Singaporean and considered herself "a Singaporean speaking proper Mandarin, not a Singaporean trying to be Chinese".

"I have had first hand experience with industry professionals in the larger film markets who are prejudiced against Singaporean actors because of our 'Singaporean accent', so while some of you may want to continue picking on my current Mandarin accent to have an issue with, I have my sights set further," she wrote.

"For myself and my children, I hope to speak proper English & Mandarin so I can be a good example for them to do so too, because the future is global and the possibilities for them are no longer restricted geographically," she added.

Her sharp response was met with support from many of her fans who agreed that she had always spoken Mandarin fluently and accurately. They also applauded her for standing up against "naysayers" and "haters".

"I fully support this forward thinking of yours," one Instagram user wrote. Another fan praised her language skills, writing: "I think the way you speak Chinese is truly amazing and I am proud to see you do so."

However, many netizens also felt that Peh's statement incorrectly equated "proper Mandarin" with the speaker's accent.

One Instagrammer lauded Peh for improving her acting skills, but urged her to draw the difference between speaking "proper Mandarin" and speaking with a native-Chinese accent.

"I am sure it is not your intention to imply all other MediaCorp actors including those acting in the same drama are not speaking proper Mandarin because they do not have an accent," the user wrote.

"While your current accent in the drama is natural as you claim it to be, it is an actor's responsibility to portray the designated character as assigned to you. If your character in the drama is not a native Chinese, then you should not be speaking with that accent so that audience can be convinced by your role," the same user added.

Another social media user reiterated the same sentiments. "I think speaking good Mandarin shouldn't be confused with its accent. Just like how there is no need to put on the American/British accent when we speak English so long as it is grammatically sound and well articulated," the user wrote.

"I personally find it a waste if local viewers are going to be distracted from your acting because of it," the netizen said.