Huat Ah! Over 300 foreign domestic workers get a taste of CNY festivities 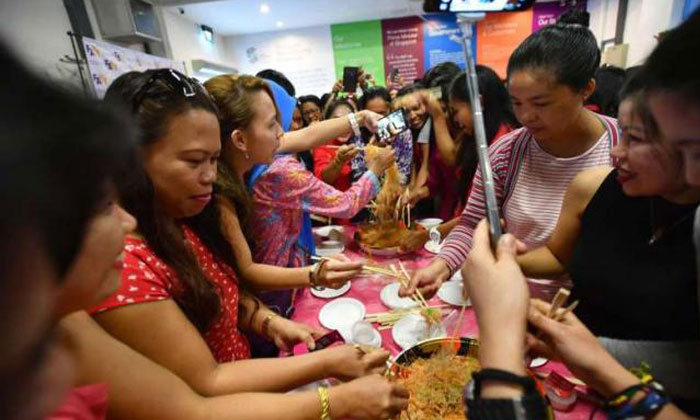 She had always helped to prepare lo hei for her employer's family, and yesterday, domestic helper Miss Lal Nun Sangi, 28, got to toss the traditional Chinese New Year salad for the first time.

She and around 300 foreign domestic helpers from Indonesia, Philippines, Indian, Myanmar and Sri Lanka, gathered on Sunday (Feb 5) afternoon for Lunar New Year festivities organised by the Foreign Domestic Worker Association for Social Support and Training (Fast) held at the clubhouse at Jalan Bukit Merah.

Miss Lal, who is from Myanmar and has been in Singapore for over four years, said: "I was always too shy to take part although my employers asked me to because they had their own family members around.

Besides the free lunch and lo hei, the group, which included Fast Clubhouse members and domestic helpers from agencies and shelters, were also treated to a traditional lion dance and received red packets courtesy of Fast's sponsors.

Some of the foreign domestic helpers also sang and danced to traditional Chinese music.

Fast was started in 2005 with the aim of providing training for domestic helpers, such as eldercare, infant care and working and cooking safely.

The purpose of the event is to educate domestic workers about the festivities and let them understand and experience the traditions in multi-cultural Singapore, said Guest of Honour and FAST president Seah Seng Choon.

Said Mr Seah: "We have celebrations for each of the nationalities so that these helpers get to experience different practices of different nationalities.

"They get to have fun and at the same time learn about the different cultures, so that if they move to new employers, they don't have a culture shock."

Mr Seah added: "This is also our way of showing them appreciation and Fast's gift to them."