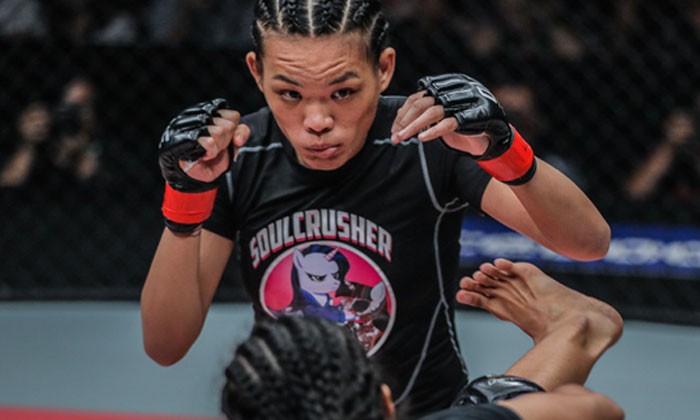 There was a point in her life when she never even dreamed of competing professionally, let alone become a huge mixed martial arts (MMA) star in Singapore.

The undefeated atomweight known as “The Soul Crusher”, Tiffany Teo says she was just a regular girl that did not particularly like to participate in sports.

However, when she chanced upon Muay Thai during her school days, the combat sport changed her life and she was instantly hooked onto training.

At first, Teo started out just like any other person looking to dabbling in martial arts. She was awkward and inexperienced.

It didn’t take long for her coaches however, to soon realise that she possessed an extraordinary talent for the sport.

“I had no plans to compete,” Teo said. “My coaches kept asking. They wanted me to go to Thailand. I thought it was a crazy idea. You want me to go face a girl that has been doing it all her life?”

After Muay Thai, Teo soon discovered Brazilian jiu-jitsu and eventually made a name for herself as a rising star in the MMA scene.

Today, Teo is a full-time martial artist, operating at an unblemished 5-0 professional clip, including two victories in ONE Championship, Asia’s premiere MMA organisation.

One thing remains missing in her career however: support from her parents.

“They do not like the fact that I am competing,” she says. “Since day one, they have asked me why I wanted to do it."

Tiffany's parents told her: "You cannot be a normal person with a nine-to-five job?"

"They have let it go, but I know they do not like it. They want me to settle down and lead a normal life.”

As expatriates living in Brunei, Teo’s mother and father never imagined their daughter becoming a global martial arts star. Even till now, Teo’s parents continue to struggle with the idea of their daughter competing professionally.

Teo says that the more they become knowledgeable about martial arts however, the more they will understand what goes on inside the cage.

“They (Tiffany's parents) told my friends it was too painful to watch. They are not into combat sports."

On 26 May, Teo returns to the ONE Championship cage in Singapore on the undercard of ONE: DYNASTY OF HEROES set for the Singapore Indoor Stadium.

Despite remaining unbeaten so far in her pro career, Teo promises her fans a new and improved version of herself.

“I made some changes to my training. You will see a different Tiffany Teo this time,” she concluded.