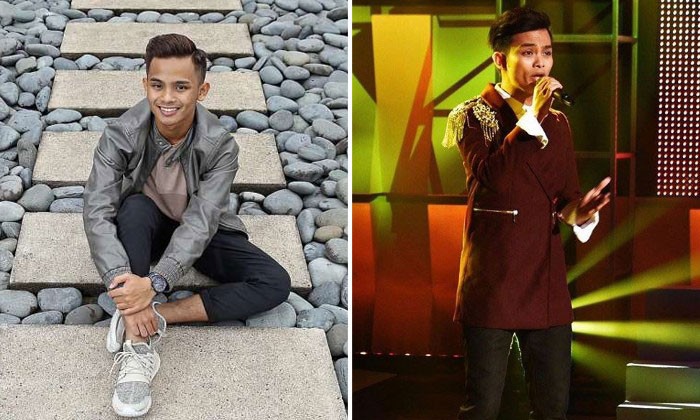 In less than half a year, 20-year-old Mohd Shahfiq went from delivering pizzas to being a rising star in the local Malay music community.

Many singers in the local Malay music industry were discovered in past editions of Anugerah, which returned to Suria this year after a six-year break.

"I'm still in disbelief," he says in a recent interview with The Straits Times.

"The first few weeks of the competition were so hard for me."

He struggled with low rankings in the early episodes, but pulled through to beat three other finalists: Syakirah Noble, Liwani Izzati and Nor Shafiq.

"I was part of my school's show choir so I was more comfortable performing in a group on stage. Having to sing alone on Anugerah was tough for me at first, so I had to work hard to improve my performance week after week," he recalls.

"Najip Ali helped me the most. He went up to every contestant after every episode and guided each of us on how we can improve ourselves. He gave me pointers on everything from my facial expressions to how I can better connect with a song."

His prizes include a recording contract with Malaysian music label Paranormal Records, which has popular singers such as Elizabeth Tan and Ayda Jebat from across the Causeway as well as Singaporean singer Aisyah Aziz in its stable.

Shahfiq, who has an older brother and three younger siblings, also won $20,000 and intends to give all of it to his parents.

He comes from a musically talented family and says he owes his win to his parents.

After graduating from ITE College Central last year, where he studied aerospace mechanical technology, he worked as a delivery man for F&B companies such as Pizza Hut and Foodpanda.

It was his housewife mother who encouraged him to take part in the Anugerah auditions, which took place in December last year. His father is a waiter.

"I've always loved to sing and my mother encouraged me to join the school choir in primary school.

"My parents would also buy for me and my siblings instrument such as the guitar, keyboard and drums and we would sing and have family jams in the house," says Shahfiq, whose influences range from pop-soul singer Bruno Mars to rock band Guns 'N Roses.

While he hopes to release recordings soon, he is also planning for a long-term career in the music industry and has applied to study music at Lasalle College of the Arts.

"I really want to make it in music. I don't just want to be a full-time singer, I also want to learn all other aspects of music and be a music arranger or maybe a music teacher."