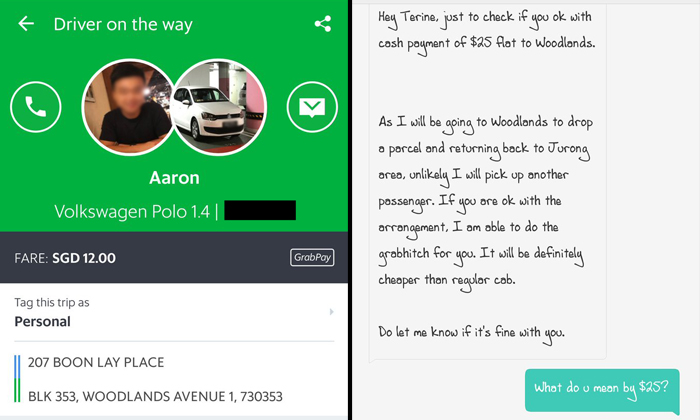 Transport company Grab has responded to a Stomp query regarding a driver who tried to negotiate a $25 GrabHitch ride for a female passenger in place of the upfront $12 fare.

On Apr 3, Twitter user @ItsAllSoTerine shared her experience about how she had booked a GrabHitch ride to go from Boon Lay Place to Woodlands Avenue 1.

Screenshots she posted shows how she was given the upfront fare of $12 -- only for her to receive a message from the driver himself, Aaron, who asked if she was agreeable to a "cash payment of $25 flat to Woodlands."

However, he was willing to give Terine a GrabHitch ride at $25.

"It will definitely be cheaper than [a] regular cab," Aaron added.

Terine, whose posting has since been retweeted over 1,300 times, said, "First time see such driver. Ownself want send parcel but then rider need pay extra $13 lol."

In response to media queries by Stomp, Grab said in a statement that the driver has since been educated on the organisation's code of conduct.

A spokesperson told Stomp: "We have called the driver to educate him on our code of conduct.

"Under point 2C of our code of conduct, GrabHitch drivers are to collect fare as dictated by the Grab app. Setting their own fares are strictly prohibited."