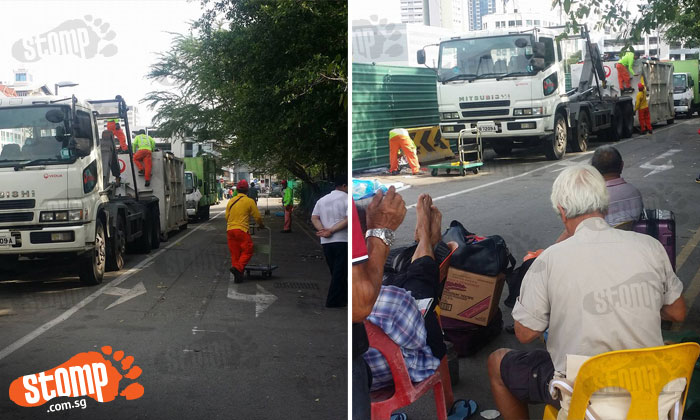 Remember Singapore's oldest flea market which used to operate along the banks of the Rochor River (Sungei Rochor) ever since the 1930s?

Well the market ceased operations since early last year to facilitate the construction of the upcoming Jalan Besar MRT train station, the cleaning up of the area is still ongoing -- as noticed by one of our Stompers earlier this morning (Jan 16).

The Thieves Market was the only spot in Singapore where sellers were not required to pay rent or be licensed -- on the condition that they do not sell new items.

Pedlars would peg out their spaces with floor mats on a first-come first-serve basis to sell all sorts of vintage / pre-loved knick knacks. Ask anyone and they will tell you that treasures can definitely be found amid the 'trash' should they buyers have the patience to sort through the items.

A Stomper was passing by the area at around 9am today, when he noticed a few cleaners tidying up the area.

"I did feel sad as I watched them clean the now empty area.

"I have been buying vintage goods from here since I was 16, and now I'm 26. It is definitely a sad sight to see."

As seen in the pictures, there were a few elderly men seated on plastic chairs in front of the road -- according to the Stomper they were previously sellers in the market.

The Stomper even had the opportunity to speak to some of them. He learnt that the cleaners had to clean the items left behind by the sellers by force.

"Though the things belonged to the uncle, the cleaners had to take it all away.

"The second uncle I spoke to, Mr Ong, 56 -- he was lucky and managed to to retrieve his items. But he is of course happy that the streets are being cleaned up of the mosquito breeding as well as from all the dirt accumulated over the decades.

"In fact, he has decided to donate his items to a local charity or those in need overseas.

"As a vintage collector myself, it is definitely sad to see the place go, but I must commend the cleaners on doing such a great job with the cleaning, and the people in-charge there for being really professional."