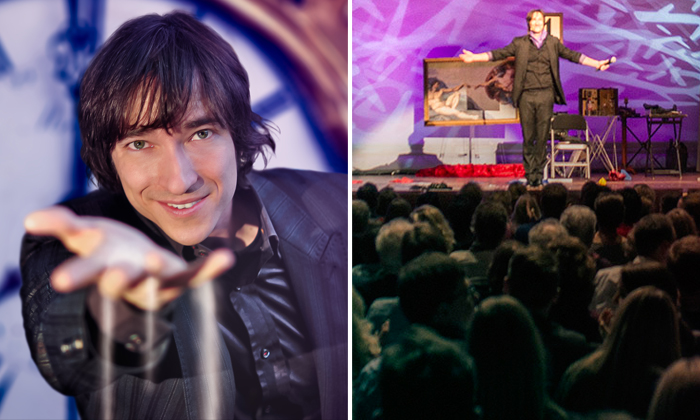 Can a single rope have four ends? Then go on to become an endless loop with zero ends?

For most of us, it probably sounds impossible.

Not for Nicolai Friedrich, however, who performed that exact trick to an impressed audience during his show at Esplanade - Theatres on the Bay yesterday night (May 7).

Previously, he had wowed the Stomp Team when he correctly predicted Thursday's TOTO results, having gotten every winning number right.

The German mentalist said we only think something is impossible because of the way our brains perceive things to be and how "perception is limited", before confidently promising to "blow our minds".

This is a promise that he delivered throughout the night with an array of captivating tricks and illusions, while spectators watched in fascination.

Just ask the three female volunteers whom he selected at random from the audience by tossing freebies at them.

They were each given a book. Betsy was asked to remember the first word on a random page, Mariana was told to take note of a random page number, and Debby had to keep in mind any long word from a random page.

Their answers were respectively: 'Build', 'Page 57' and 'Photographer' -- all of which Nicolai had already guessed, written down and were proven to be correct.

Page 57 was missing from Mariana's book when she opened it, after having been torn out, but appeared again with three words on the page underlined: 'Baby', 'Marinade' and 'Bytes'.

Scramble up the letters from all three words and you will get the names of each participant: Betsy, Mariana and Debby.

In his next act, Friedrich handed another random spectator, Sam, an astrology book. Sam was told to look for his own star sign and Friedrich scored once again, by correctly guessing 'Pisces'.

"Is your birthday 9th March?" asked Friedrich, who had already written down his answer on a whiteboard.

For those who thought that the award-winning mentalist finally screwed up or were glad to see him wrong for once, sorry but you are going to be disappointed.

Friedrich, who exuded wit and humour all at once, responded, "Yup it's 10th March, I was just joking" and showed what he had written on his whiteboard earlier: 10th March.

If you are still sceptical, the charismatic mentalist can time-travel too, though he can only go back 45 seconds, he said.

He proceeded to tear a copy of The Straits Times into many halves, before undoing all the damage with a simple wave of his hands, then presented the newspaper intact again and as good as new.

Other tricks that Friedrich, who is known as the best mentalist of the world, performed that night included:

For his closing act, Friedrich involved every single member in his audience.

First, he asked a random male volunteer up on stage to hold a sturdy glass pitcher. Everyone else was then told to rub their palms together and direct the energy to the pitcher -- which eventually shattered, leaving the volunteer particularly stunned.

Way to end the night with a bang.