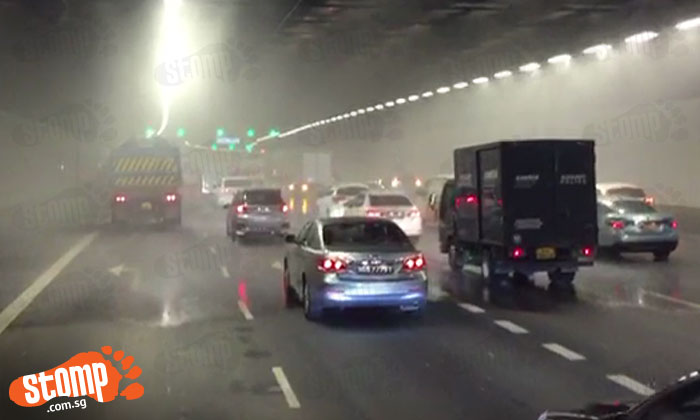 A water-based fire-fighting system along the Marina Coastal Expressway (MCE) was accidentally activated today at around 12.57pm.

Stomper Sravan alerted Stomp to what happened and sent a video of the scene on the expressway when the incident occurred.

In the video, sprinkles of water can be seen coming out from the top the of the tunnel.

Traffic slowed down as vehicles approached underneath the water jets and motorcyclists can be seen at the road shoulder putting on their rain jackets.

Said an LTA spokesperson with regard to what happened:

"At 12.57pm today, the water-based fire-fighting system along the Marina Coastal Expressway (MCE) eastbound tunnel, before the exit to Fort Road was accidentally activated.

"After verifying that there was no fire, the system was immediately switched off, and normal traffic condition resumed at about 1.06pm.

"LTA is investigating the cause of the incident.

"We apologise for the inconvenience caused."

Well, although drivers were slightly inconvenienced, at least some of them managed to get a free car wash.