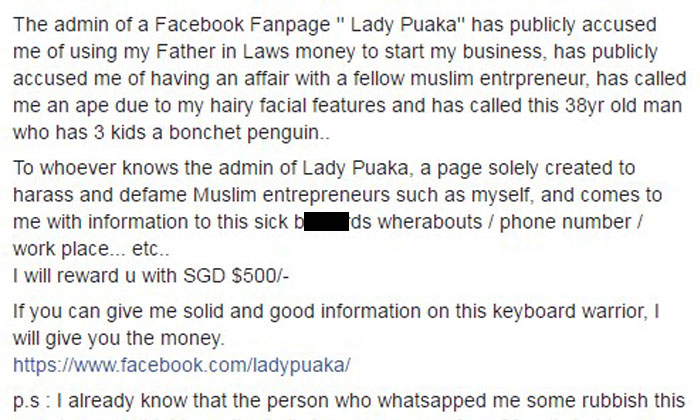 The owner of a flooring company has taken to Facebook to find the admin of a Facebook page who has allegedly been spreading falsehoods about him.

He is also offering a $500 reward for any "solid" information about his antagoniser.

Bhai Hafz Anguillia, the managing director and owner of LaminateFlooring.sg had evidently had enough when he shared his frustrations yesterday (Feb 28).

He started off his post writing about how he set up his company from nothing with his wife.

"When I started my company, I started from zero," he said.

According to him, he has supplied and installed flooring in more than 10,000 homes in Singapore since starting his business in 2008.

He refuted claims that he was born with a 'silver spoon' in his mouth or that he had received monetary assistance from friends or relatives.

He is unapologetic about the success he has achieved and wrote, "I will be damned if anyone take[s] this away from me".

He then explained that the admin of a Facebook page named Lady Puaka has publicly accused him of using his father-in-law's money to start his business and of having an affair with another entrepreneur.

He claimed that the admin had even called him an "ape" because of his "hairy features" and a "bonchet penguin" (penguin with a big tummy).

He said that the admin of the page seeks only to "harass and defame Muslim entrepreneurs" so he is rewarding $500 for any information to the admin's whereabouts, phone number or work place.

He has since updated his post informing his friends and followers that he has identified the alleged cyberbully but it is unclear how he got this person's information or if he is indeed the administrator for Lady Puaka.

Related Stories
Suspect arrested after woman writes about colleague getting molested, police investigating officer's insensitive comments
Amos Yee speaks from US jail: He is crowdsourcing for $10k to fund his legal fees and life in America
Guy posts photo of Grab driver intending to flame him -- but shoots himself in the foot instead
dispute
controversy
facebook
quarrel
argument
bully