'Face-slapping', 'vampire facial' and other beauty bizarre beauty treatments you don't know about 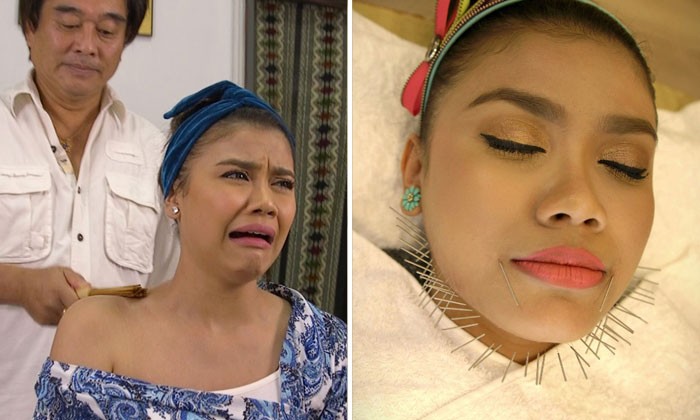 As the host of travel and beauty show Cantik Detektif, local actress-host Huda Ali jets off to all corners of the globe to experience unique beauty treatments.

For the third season of the show, airing on Suria on Mondays at 8.30pm, shetried techniques such as hypnosis to control appetite and facial cleansing with silkworm cocoon.

Huda, 30, who is also behind LalooLalang, an online multi-label shopping portal that holds bazaar events, has learnt a thing or two about beauty.

The mother of one now swears by natural remedies. She drinks jeera (cumin) water, uses turmeric instead of antiseptic cream and boils ginger to drink with honey for sore throats.

"I find they are extremely effective. I try as much as I can to practise what I have learnt from the show," said Huda, whose fifth LalooLalang bazaar is on from today to Sunday at the National Museum of Singapore.

Here are some of the treatments she has come across.

In Bangkok, Thailand, face slapping is a popular way to get firmer skin and a slimmer face. Huda's face was slapped with much gusto by a flamboyant woman called Koong.

Koong does this while Thai pop music blares from the radio.

"I saw results, but I had to live with an uneven face for a while," said Huda, laughing.

Remember Kim Kardashian's bloodied face on our TV screens in 2013 when she had a "vampire facial" on reality TV series Kourtney And Kim Take Miami?

It was stomach churning, but the gruesome treatment comes with the promise of skin as smooth as a baby's bottom.

In a clinic in Sydney, Australia, Huda watched a woman go through the procedure, which is actually called Platelet-rich Plasma therapy.

Your blood is extracted and the platelets are injected back into a deeper layer of the skin.

It takes between three and six months to see the results.

Huda was not willing to take the risk and said: "I just didn't feel too good about it."

Getting beaten with a bamboo pole sounds like torture.

But in Kuching, Sarawak, "bamboo beating" is a treatment to soothe muscle aches.

Sore areas are beaten repeatedly with bamboo sticks of varying thickness to induce heat in the muscle so that toxins can be expelled through perspiration.

The treatment, seen in the show's second season, left Huda with bruising on her shoulder.

"It was extra painful for me because I was scared and unable to relax," she said.

Barbers in Goa, India, turn up the heat by setting your hair on fire. In the third season, Huda saw a barber doing that - blindfolded.

She described it as a fascinating "magic show" where he cuts hair through instinct.

"I regretted not trying it but at that point in time, I had a lot of hair spray in my hair so I was a little worried.

"What if my hair became extra-flammable and the fire spread too fast? I might have left with a bald scalp," said Huda, laughing.

And finally, something that is available right here in Singapore, the popular traditional Chinese treatment, acupuncture. It is said to help in relieving muscle tension and constipation, achieving a slimmer physique and more.

In Chengdu, China, Huda had 180 needles stuck in her chin. All to achieve the coveted V-shaped face.

"I have sensitive skin. Even mosquito bites last for weeks. So this actually left bruises for some time," said Huda.

"But I could tell there was a slight difference."