Eww! Poor passenger is going to end up sitting on this uncle's spit on SBS bus 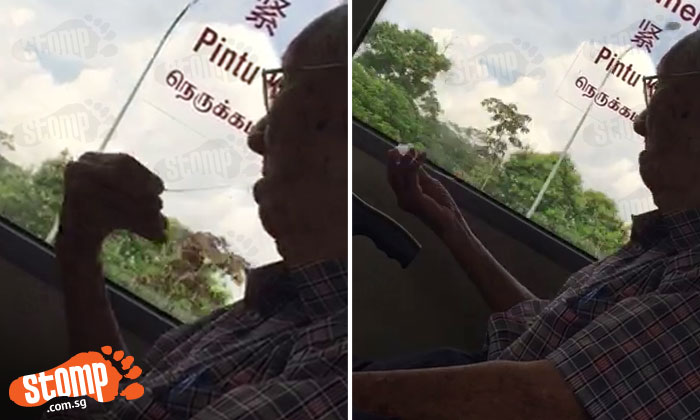 Stomper C's friend was on board Bus 858 in Punggol on Tuesday (Jan 17) when he had an unpleasant encounter.

In a WhatsApp message, the Stomper said that her friend saw an elderly man coughing loudly before taking his phlegm out of his mouth with his hands and throwing it onto the floor.

In a video the Stomper sent, the man can then be seen placing his hand on the seat.

One can only imagine what is in store for the next passenger who will be uitilising the seat after the elderly man.

On Jan 19, Stomp published a story about another elderly man behaving indecently on an MRT train.

A photo sent by Stomper S shows the man sitting down on the seat and resting his feet on an electric mobility scooter.

"He was scratching his groin and nose. We know you are an elderly person, but where are your basic manners?"

These two occurrences highlight the fact that while we should respect our elders, they too need to earn our respect by behaving appropriately.

Related Stories
Yes, we have to respect the elderly... but even when they behave like this?
inconsiderate
disgusting
inappropriate
SBS bus
elderly