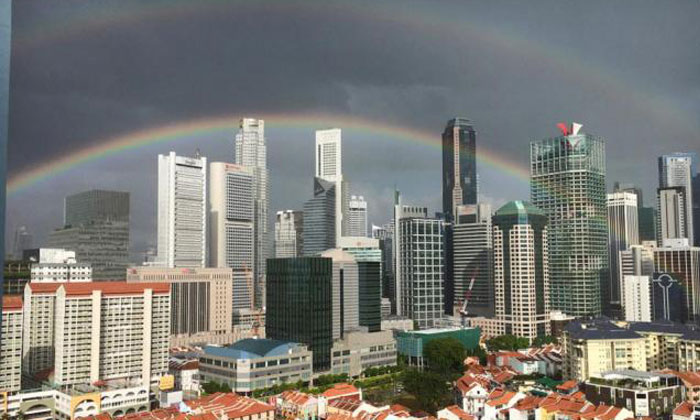 While heavy showers blanketed parts of Singapore on the third day of Chinese New Year on Monday (Jan 30), there was something for Singaporeans to cheer about after the rain - a double rainbow event.

Photos of the rare occurrence quickly made their way onto social media, with sightings concentrated mainly in central Singapore and the Central Business District area.

In Chinese culture, a double rainbow is considered auspicious and a reason for reflection and mediation.

The phenomenon occurs when light reflects inside raindrops twice, creating a second spectrum across the sky.

The second rainbow is usually fainter because sunlight is reflected internally twice by the same raindrops.

The National Environment Agency (NEA) had earlier on Monday warned of thundery showers over many areas in the late afternoon.

It was a particularly wet Chinese New Year for Singapore this year, due to a monsoon surge affecting the South China Sea and the surrounding region.

A double rainbow was last reported in Singapore on Sept 30 last year.