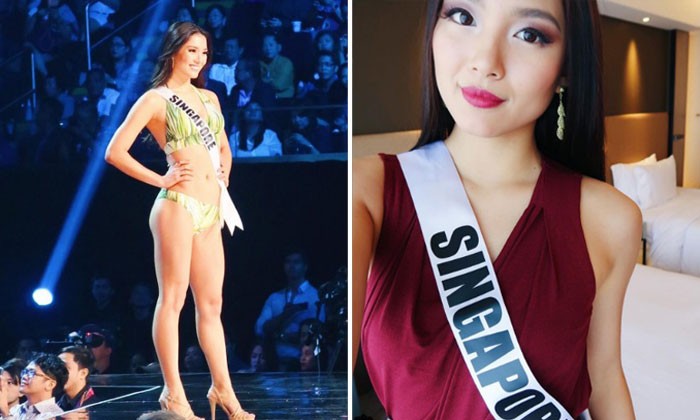 The 21-year-old Miss Universe Singapore 2016 winner had to get at up at 2.45am to prepare for what was going to be one of the most memorable days of her life.

Fresh from the competition, held in Manila this year, Miss Chou told The New Paper: "We had to be out really early to make it for the 8am broadcast, I had only three hours of sleep!

"Although I was a bit tired, the excitement and the hype about getting the show started carried me through the day."

Yesterday morning, the world watched as Miss Chou and 84 other representatives from around the globe competed in the 65th edition of the annual competition, hosted for the third time by the Philippines.

Miss Iris Mittenaere, 22, from France, walked away with the Miss Universe crown. Raquel Pelissier of Haiti was the first runner-up, while Andrea Tovar of Colombia finished second runner-up.

"I feel that the winner should not just be beautiful outside but has to have a good heart too. She is there for people. She does embody the attributes of what a Miss Universe should be," she said.

But Miss Chou, who did not manage to place in the top 13, admits that she felt slightly disappointed at not performing better in the competition.

She said: "I would be lying if I said I was not disappointed, I had expectations and goals.

"If it is meant to be, it's meant to be. I have done my best and I'm thankful to have learnt a lot - that is what is most important."

Given their home ground advantage, some have expressed shock at how this year's Miss Philippines, Maxine Medina, did not place in the top 3 .

But Miss Chou said that the audience in Manila were sporting and continued to cheer for the remaining contestants.

"Before they announced the winners, I could hear the cheers," said Miss Chou.

"Even though Miss Philippines was not in the running they were still supporting the remaining girls. You can tell they are passionate about pageantry."

When asked about what the atmosphere was like after the competition, she laughed and said everyone was excited to go back home.

Miss Chou herself is flying back today.

She had travelled to the Philippines with her relatives, including her father and her grandmother.

She exclaimed: "I can't wait to go back to see my mother!"

Coming back home also means getting to enjoy the remainder of the Chinese New Year celebrations.
The festival means a lot to Miss Chou because she said it is the one time of the year when her family, who are scattered around the world, come together to catch up.

She added: "But I got to spend this new year with the most amazing group of girls, I even taught them how to say 'Gong Xi Fa Cai'.

"It was quite special in its own way too."

Related Stories
Pretty police inspector in SPF video 'reported' for stealing... hearts
Car salesgirl gets looked down upon, hit on by men -- but leaves them screaming with her driving skills
beauty pageant
pageant
pretty
entertainment
competition