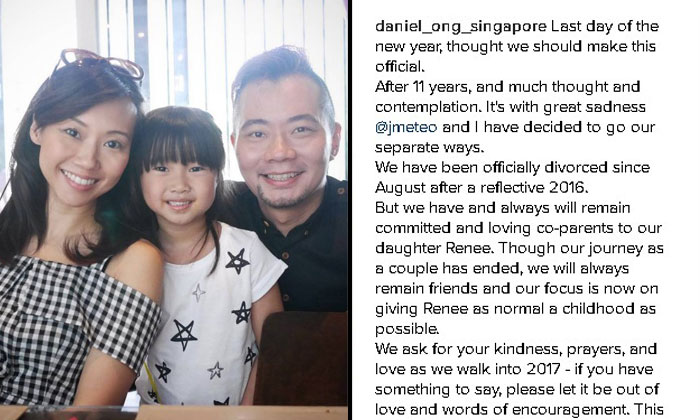 Former beauty queen Jaime Teo and ex-radio DJ Daniel Ong announced they have been divorced since August, on Saturday (Dec 31).

On the final day of the year, Teo, 39, and Ong, 41, announced the news in separate posts on their respective Instagram accounts. The pair have a six-year-old daughter, Renee.

Teo and Ong were also business partners, after founding cupcake chain Twelve Cupcakes together in 2011. The chain has 12 outlets in Singapore, according to its website.

Teo wrote in her post: "Though our journey as a couple has ended, we will always remain friends and our focus is now on giving Renee as normal a childhood as possible."

Ong added that the past months had been "a heartbreaking and very tough time, but we look forward to a brand new 2017 and future".

Related Stories
Restaurant owner in Sichuan offers free beers to celebrate his divorce
Infidelity among reasons why couples divorce in Malaysia
'The spouse of my husband's mistress became my friend and confidante'
More expat spouses forced to leave country after divorce, some even have to leave their children behind
Jaime Teo
Daniel Ong
celeb couple
celebrity
entertainment
divorce
break up