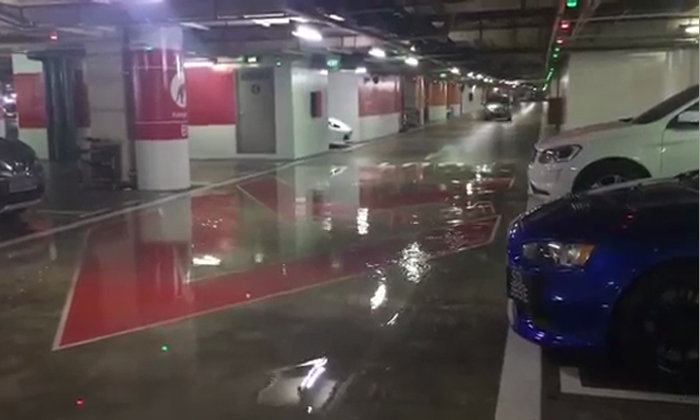 A burst pipe caused a stench and water to pool in Suntec City's carpark on Thursday (March 23).

In a photo sent by a member of the public, water could be seen spilling onto the floor of the section of the carpark - labelled with a kangaroo symbol - from an overhead pipe that had burst.

No cars were underneath the affected pipe when the photo was taken, though it remained unclear if any vehicles were initially parked at those lots and moved after the incident.

Separately, an 18-second video clip showed a pool of murky water spreading across the floor in the "red" section of the carpark as a car drove past.

The Straits Times understands that the defective pipe carried waste water, which was the cause of the stench.

When ST contacted the Suntec City security team - which was in charge of rectifying the problem - at 4.20pm, a spokesperson claimed the situation was "already under control" without elaborating further.

Ms Pow Lay Kuan, Chief Executive Officer of APM Property Management, which manages Suntec City, said: "The incident occurred at a small section of the car park which was vacant. No car was within the vicinity. The matter was attended to immediately and rectified."

The carpark at the Suntec City development near Promenade MRT station is Singapore's largest, and can accommodate 3,100 vehicles.