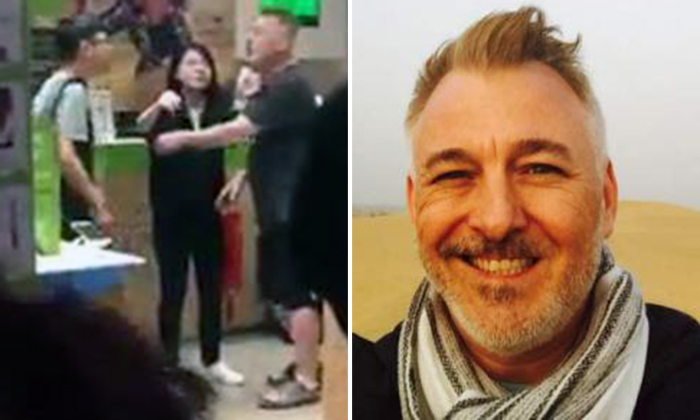 A courageous man who was seen standing up to another who was yelling vulgarities and spitting at him and a StarHub employee has been identified as the creative director at video game publisher Ubisoft.

The video showing the dispute was posted on Facebook page All Singapore Stuff on Friday (Feb 9) and credited to Abdul Wafiy Abdul Rahim.

According to the post, the man in light grey shirt had been abusing the StarHub employee when the other man, identified as Mr Justin A. Farren, stepped in.

The clip shows the man in the light grey shirt gesturing angrily, yelling vulgarities and spitting at Mr Justin.

The latter, however, remained calm and shielded the woman and led her behind the staff counter.

According to Mr Justin, who identified himself in the post's comments, the man had also pushed the female staffer but security guards were responsive and did their best to diffuse the situation.

He added that they subdued the man so that he had to speak with the police officers who were called to the scene.

The gaming giant is behind such popular titles as Assassin's Creed, Far Cry, Rainbow Six, and Watch Dogs.

He chose to say that while the man's abuse of the staffer was uncalled for, "things like this are rare in Singapore".

"I suspect he has some mental issues right now, so please give him some sympathy," added Mr Justin in his post.

"It was my first true experience with racism towards me in Singapore. I have lived here almost five years and love it very much and am proud to call it home.

"Things like this are rare in Singapore. Consider yourselves very lucky."