Biscuits, mobile cables and even free 'live concert': Here's what you'll get when you board their taxis 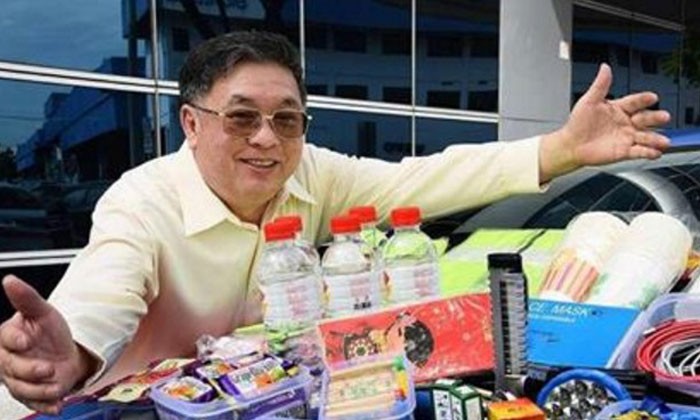 If your mobile phone charging cable is broken while you are out and about, ask your taxi driver for a spare. If he happens to be Mr Ong Swee Ker, 62, you could even keep the cable.

Once, a passenger realised her cable was broken on the way to the airport and he gave her one for free.

He had the idea to keep spare cables in his cab after a passenger borrowed his for a quick recharge.

He tells The Sunday Times in Mandarin: "When I was a driver at the Singapore Youth Olympic Games, I learnt about good service and how to value-add. Then I continued to do so.

"I always want to upgrade my services," he says, referring to the Wi-Fi hotspot and charging ports he added to his vehicle two years ago.

Since he started to provide these extra goodies in 2010, he has given out more than 30 umbrellas and more than 20 bottles of medicated oil. On average, he spends about $5 a day replenishing his stocks.

His devotion to good service has paid off. The father of two children, aged 33 and 21, who has been driving with ComfortDelgro since 2008, has bagged seven awards, including three Excellent Service Awards from Spring Singapore.

He is among taxi drivers who go the extra mile for passengers. There are those who fly under the radar, but most super-cabbies are recognised with tourism or service awards.

Another such taxi driver, SMRT's Yap Eng Meng, 47, has received more than 20 written compliments and nine awards, including the National Kindness Award.

"I'm a hybrid taxi driver - a problem solver, an itinerary planner, an entertainer and an educator," says Mr Yap, who is married and has no children.

Some private transport drivers are also pulling out all the stops for a smooth, enjoyable ride, although none have been known to include a friendly puppy for companionship, like an American driver did in a video circulated on social media.

Sometimes there is an incentive for them to do so. Ride-hailing companies Uber and Grab encourage riders to rate drivers using a five-star system and the top drivers are entitled to special perks and rebates.

There are more than 50,000 registered Grab drivers.

"There is a Platinum Programme where top GrabCar drivers enjoy benefits such as a fuel discount of 25 per cent and an additional $250 bonus a month," says Mr Lim Kell Jay, head of Grab Singapore.

GrabCar is a private transport option that allows passengers to book a chauffeured ride for a pre-arranged fee.

Uber, which has "tens of thousands" of registered drivers, has a #6Star Award, where drivers with ratings above 4.65 stand a chance to win $800. One of them is Mr Patrick Koh, 43, who has a rating of 4.86 stars since joining Uber in March last year. He perfumes his car with lemongrass "to calm down nasty passengers" while providing complimentary bottles of water, candy, wet tissues, medicated oil and a phone charger.

"If it puts a smile on my passengers' faces, it makes my day. It's also just my attitude to work - I must always give my best," says Mr Koh. He is married with two children and runs an English-learning portal for Chinese speakers.

One night, he was driving four passengers when one of them looked pale and said he felt giddy.

"I suspected he had a low blood sugar level so I offered him a sweet. A few minutes later, he thanked me and said he suddenly felt so much better," he says.

He does not mind spending about $50 a month on the extras because "if I'm calculative, I will never enjoy what I do".

Meanwhile, part-time GrabHitch driver and full-time IT manager Darryl Xu, 38, has a Wi-Fi hotspot in his car and his phone is loaded with music-streaming app Spotify. He also provides bottles of water.

His passengers are welcome to choose their music or take the water, but most decline.

"Most are appreciative, but some are cautious. I don't blame them," says Mr Xu, a five-star-rated driver.

Mr Koh chalks this down to the fact that Singaporeans may feel "paiseh" (Hokkien for shy or embarrassed), especially when some trips cost as little as $3.

But there are those who take these gestures for granted.

He says: "I used to provide free chocolates, but people would leave the wrappers in the car and that's just unpleasant for the next passenger."

He offers cushions and a listening ear

Working as a youth coach and co-founder at The Green Apple project - a youth mentorship company which he founded with his wife in 2012 - required him to drive to and from schools.

"When I saw certain people at the bus stops near the schools, I would sometimes stop and offer them a lift," says the father of three boys aged 15, 12 and nine.

"It could be old people who have difficulty walking, heavily pregnant women or students with their mothers when it's raining - most would accept my offer," he says.

For additional income, he signed up as an Uber driver in September last year.

He provides extra amenities for his passengers in the form of two smiley cushions, charging ports and, sometimes, a listening ear.

Once, a Caucasian man in his 30s opened up about some personal problems during a car ride.

"In the end, he shook my hand a lot of times and thanked me, saying he felt so much better. I felt really good too," Mr Syed says. "I'm a service guy and I also believe that if you give more, you get more.