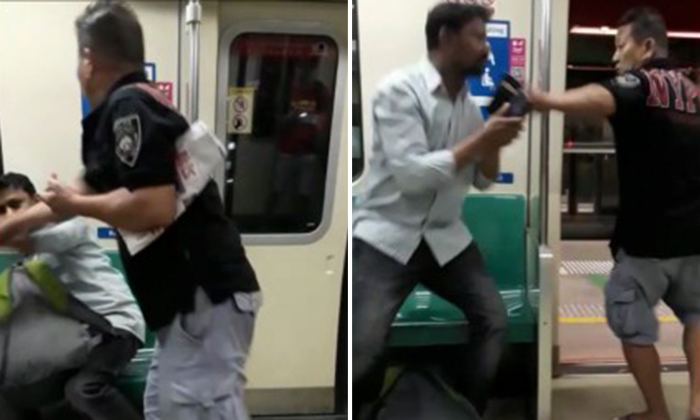 A video being circulated on WhatsApp shows a man threatening a commuter on the train for talking on his phone and disturbing his rest.

Stomper Prithipkuttan alerted Stomp to the minute-long clip, which starts with the man pointing and yelling angrily at the commuter, who is seated.

The man tells the commuter that his conversation on the phone had disturbed his 'rest.

When the commuter says that he was simply talking on his own phone and not disturbing anyone, the man yells that his rest was disturbed.

He even threatens to hit the man, and challenges him to a fight.

When the commuter tries to take a photo of him, he slaps the phone out of his hand.

The causes the phone to fall out of the commuter's hand and break upon hitting the train floor.

The man then rushes out of the train as the commuter picks up the pieces of his phone.

Once outside, he yells at the commuter to step out of the train to fight with him.

It is unclear where or when exactly the incident happened at.

Related Stories
Teen kicked and punched man until his nose and eye socket broke -- after trying to stop him from pulling his wife's hair
What happened? Woman carrying child and auntie shove and yell at each other at VivoCity
violence
angry
threaten
MRT
bully