'Awards' and 'certificates' at hawker stalls: What do they actually mean? 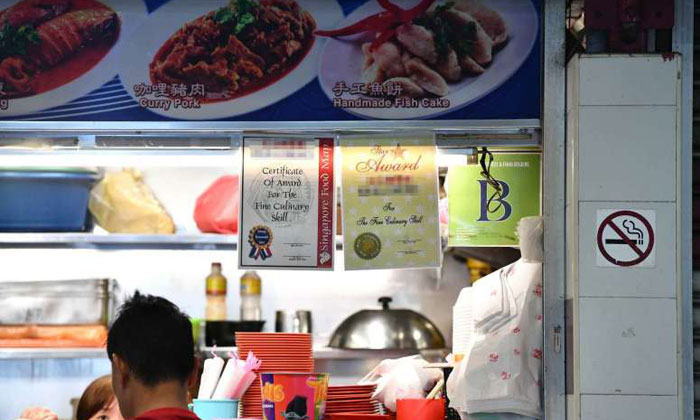 The hawkers proudly display the star awards which boast of their culinary skills and lift their fare from the ordinary to among the best Singapore has to offer.

These accolades and certificates, neatly laminated and claiming legitimacy with the national lion head symbol, help entice customers to sample the food.

But not all certificates beneath the glossy sheen were earned. Some were paid for and amounted to little more than a receipt for being advertised online.

The two main players in the field - the Singapore Food Web and Singapore's Best Food - have more than 1,000 hawkers in total listed on their websites.

But checks with the Accounting and Corporate Regulatory Authority (Acra) drew a blank. Both websites are not run by any Singapore-registered company.

Singapore Food Web dishes out two awards - a star award and a certificate award for fine culinary skills - under a company called the Singapore Trade Press.

The website did not have an address or contact number and e-mail failed to get through. The Sunday Times tracked down the salesman who sold the advertising packages through the hawkers who paid for them. When asked how much the Singapore Food Web, which has been operating since 2008, charges hawkers to advertise online, its marketing staff Ronnie Wang replied: "$400."

Mr Ernest Teoh, who runs a yong tau foo stall at the Redhill Food Centre, has both Singapore Food Web awards displayed at his nine-month-old stall. The award certificates were signed by an "official food taster" and a representative of the Singapore Trade Press, both unnamed.

The 28-year-old hawker said that he was approached by the Singapore Food Web earlier this year.

"Ronnie said a chef tried my food and nominated me." he said. "I signed up."

When asked if the awards were misleading and whether displaying them prominently has boosted business, Mr Teoh replied: "I have my regulars. It is just a piece of paper."

Mr Wang declined to give any information on the panel of chefs and their criteria for selection.

An Acra check found that Singapore Trade Press was registered to 73-year-old undertaker Wong Peng Sun. The company was set up in May 2008 but terminated a year later.

Mr Wong, who is illiterate and lives in a Housing Board flat in Clementi, said he had met Ronnie at a Geylang coffee shop in 2008 and allowed him to use his identity card to register a company in exchange for a monthly payment of $200.

He claimed that he did not receive any payment and terminated the company in May 2009 after being saddled with debt over unpaid office rent and utility bills. The date tallied with Acra records.

Mr Wang admitted that he knew Mr Wong and the Singapore Trade Press was set up in the latter's name, but he would not elaborate on the relationship. He also would not directly answer the question on why the now defunct company is still handing out food awards.

There is no need to have a company to run the website, he said, adding that he is just an employee.

"I have somebody higher than me who hired me," he said, refusing to name his employer.

Mr Wang brushed aside the suggestion that the awards might mislead the public. "It is up to the individual to look at the award and taste the food."

The Singapore's Best Food website is also not run by a company.

Businessman Alan Wong said that he set up the website as a one-man show out of personal interest in 2003 to help hawkers promote themselves online.

"It is a stepping stone for them. When they list with us, people can at least know their food," he said. "On their own, they may not have the budget to advertise online."

The 49-year-old declined to say how much he charges, saying that it is "very affordable".

"I don't sell the certificate of the listing," he said, adding that certificates are given to hawkers who are already reviewed by the press or after he personally tried the food and found it to be good.

Ms Susan Toh, who runs Tasty Prawn Mee at Havelock Road, said she has been paying Mr Alan Wong $90 a year for more than 10 years to advertise on the website.

The Sunday Times spoke to about 20 hawkers at three hawker centres who displayed the award certificates, but most declined to be named.

None admit to knowingly paying for the "awards".

A yong tau foo hawker at Bukit Merah View Market and Food Centre said she suspected that something was amiss when she saw how easy it was for other hawkers to also receive the award.

A hawker even chased The Sunday Times away, saying that the newspaper was unfairly singling out her cooked food stall. "If you want to report that my food is good, I will talk to you. This type of news, I do not want."

At least one hawker, a noodle seller, said that he believed that the Singapore Food Web awards to be legitimate because of the official lion head symbol.