Another cyclist tired of living: He tailgates lorry and treats road like playground 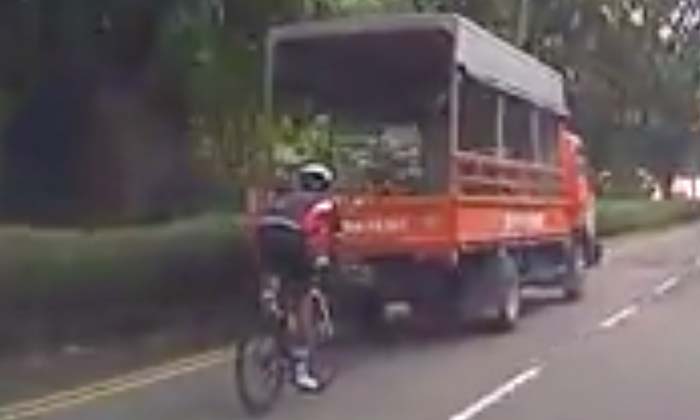 A video circulating on Facebook shows a reckless cyclist who tailgated a lorry, cut lanes, and gave remarks and hand gestures to driver who sounded a horn at him along Gambas Avenue on Jan 29.

In the video posted on Road.sg by Thomas Ho, the cyclist clad in a purple and red shirt can be first seen riding closely behind a lorry.

He then switched lanes, emerged from the right and recklessly cut into the middle lane, oblivious to the oncoming traffic.

The cyclist continued to speed ahead, and according to the video caption, the driver sounded a horn at him.

While waiting for the traffic light to turn green, the cyclist came over to the front of the driver's car, and gave remarks and hand gestures, displeased at being honked at.

Read a caption accompanying the video:

"2. He goes to the first lane to overtake and cut into the middle lane right before my moving car. (Of course I had to sound the horn to warn him of his dangerous act.)

"3. He comes over to the front of my car as if the road was his playground, and gave me sound remarks and hand gestures.

"With the new traffic rules? Is this what we will be facing when we are on the road now?"